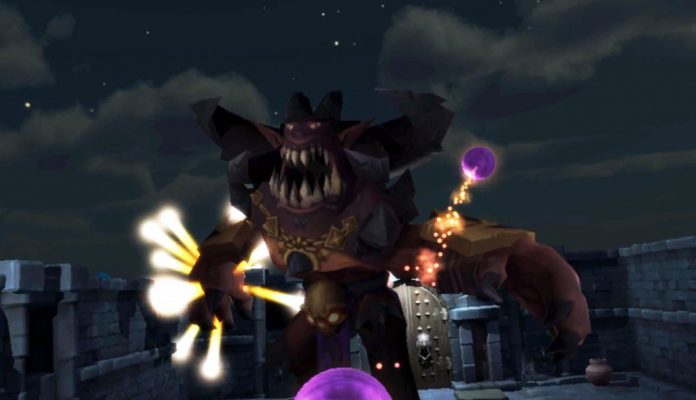 Vanishing Realms: Rite of Steel is undoubtedly a highlight in the forthcoming HTC Vive line-up, but there are other ways to deliver a role-playing game (RPG) experience in virtual reality (VR). A Legend of Luca takes the interesting perspective of placing the player as an adventurer in a real-time simulation of a tabletop game, offering deep upgrade systems and collectables to boot.

The videogame begins by instructing the user to place the floor height at their waist. This is an unusual set-up for HTC Vive experiences certainly, but it works very well. The player is essentially a disembodied pair of hands manipulating the environment, able to reach around blocks and statues and strike with their weaponry while remaining stationary. The full stretch of every room is within the player’s reach at all times, offering them a commanding view as if they were looking down upon a tabletop of Games Workshop-esque miniatures.

However, A Legend of Luca plays in real-time, and enemies will attack the player without the need for provocation. As the player moves between rooms (simply by moving the HTC Vive’s motion-controller to the door they wish to venture through and squeezing the grip buttons) they will need to quickly scan the new location for enemies and other interactive objects. Find a treasure chest? Make a note of your location through the use of the map located on the information panel on the top of your screen. Land on some spikes? Quickly move away again, ensuring that your health hasn’t depleted too much before moving on.

Each run through the randomly generated dungeon in A Legend of Luca is unique; the player starts at a beginning point and must work through to the end. Completing a dungeon may only take 20 minutes, but this isn’t the true objective of the videogame. Instead, there’s an assortment of weaponry and artefacts to collect, and A Legend of Luca isn’t truly finished until you’ve discovered them all.

Once a new weapon or artefact has been discovered it’s yours forever, potentially upgrading your attack, health or financial gain for each subsequent dungeon visit. It’s a mechanic that reminds of the Dreamcast and Wii title Baroque, or more recently the Xbox One’s Ziggurat. It spurs the player to discover new encounters, never quite knowing whether this next crawl will offer the advantage the player needs to overcome their greatest weakness. A loss is never a loss; it’s just another chance to reequip and go back in stronger than before. 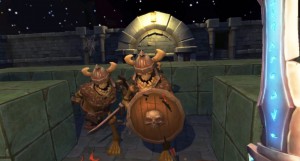 The design of A Legend of Luca is undoubtedly unique, but also not without issue. The player’s weapon can often get caught on objects and require re-angling of your reach, which can be tedious when taking damage in the heat of combat. Larger enemies will often move to the player’s central position, leaving them no option other than to rain down blows and hope they outlast their foe. Starting each new room in the direct centre means that enemies behind will often overpower the player before they have been able to scan the area for hazards and such, occasionally resulting in a somewhat unfair feeling upon death.

A Legend of Luca is a charming and engrossing VR RPG experience; a unique take on a well established formula. It’s an enduring title, too, with the design of the dungeons kept short in order to promote repeated visits in quick succession. It won’t take months to see all that A Legend of Luca offers – indeed, the visual variety is rather limited – but it’s a wonderful idea that in time could hopefully be fleshed-out further.