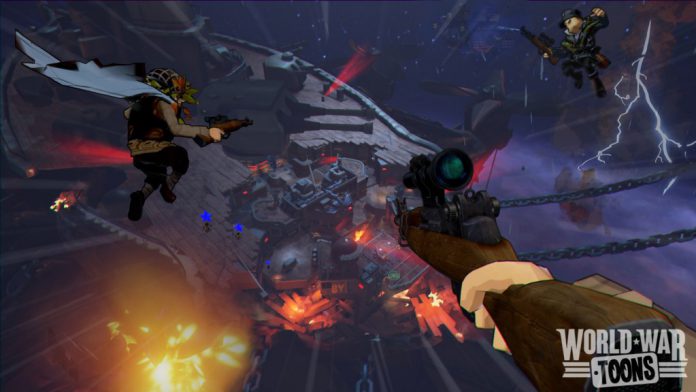 World War Toons is a virtual reality (VR) videogame that VRFocus has had the opportunity to get hands-on with on many occasions. From the original debut with a unique control scheme to the troubled PlayStation Move edition seen at the Electronic Entertainment Expo (E3), Los Angeles, in June, World War Toons has certainly had it’s ups-and-downs in terms of finding an input sweet spot. Throughout this process however, one thing has remained constant: World War Toons is fun.

The PlayStation Experience build of World War Toons brought with it yet another control scheme in addition to a new gameplay mode and playable class. The movement control in this edition brought strafing into the experience, with the left analogue stick now controlling feet movement in four directions (opposed to the face buttons on a controller) while aiming and fast turning is still governed by the degree in which the player moves their head. This setup is the result of focus testing, according to Reload Studios, and while it may make the experience more familiar to traditional first-person shooter (FPS) players it’s arguably more likely to distance newcomers than the initially obscure seeming digital system the studio originally developed.

The new gameplay mode introduced, playable on a brand new map, is essentially a King of the Hill mode. Players must take control of a designated area while a large bullet is loaded into an even larger gun and fired upon the opposing team’s airships. Each team has 3 airships, and the winning team is that which eliminates the enemy’s fleet before losing their own. It’s a fitting take on a traditional gameplay mode for World War Toons‘ cartoon-esque approach to FPS and the new map shows more of what Reload Studios can do with verticality in design as the first map revealed is most certainly lacking in this area. 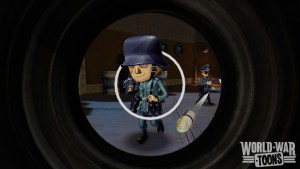 The Sniper class, also playable for the first time at PlayStation Experience, is another addition to World War Toons that on paper sounds like an awful mistake. The sniper is given the advantage of an increased head size on enemy players when scoping, but it’s not as immediate an advantage as it sounds. When holding down the trigger the sniper enters zoom mode and maintaining your sights on a player will gradually increase the size of their head. The player still requires some skill to ensure that they can achieve their intended kill whilst avoiding being taken out themselves.

World War Toons is a videogame that constantly sounds like it’s making wrong turns in every direction, and yet once played everything fits into the tongue-in-cheek fiction. It’s often been stated that VR is not something that can be explained, but rather must be tried in order to be understood: World War Toons is a perfect example of why this is the case. World War Toons has come a long way since its announcement earlier this year and though it’s hit some bumpy ground along the way it remains one of the most enticing traditional videogames experiences coming to VR next year.