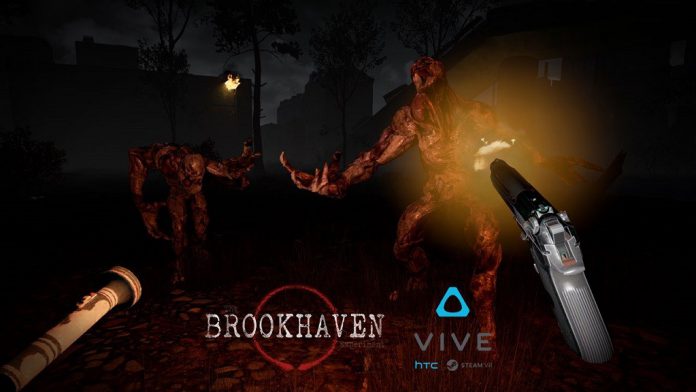 While gallery shooters have become prevalent on the Samsung Gear VR, the equivalent for HTC Vive are first-person shooter (FPS) experiences that have you tackling waves of enemies encroaching on your standing position. Some, such as HordeZ, Arizona Sunshine or Zombie Training Simulator attempt to strike out and bring something new to what could already be seen as a lifeless reinterpretation of the genre for virtual reality (VR). Others simple aim to ride on the thrill of arming the player with a gun and letting them shoot at enemies with a greater level of immersion than playing on a traditional 2D screen. The Brookhaven Experiment, based on the preview build VRFocus has been hands-on with, is sadly the latter.

A wave-based experience, The Brookhaven Experiment gives the player a torch and a pistol and tasks them with taking down waves of creeping corpses and mutations that attack with varying ferocity and agility. The player must survey their surroundings in a full 360 degrees in order to prevent these hordes from coming to close and landing attacks that will drain their health. It’s a simple, formulaic experience and sadly never seems to even attempt at pushing beyond these boundaries.

Waves increase in difficulty as would be expected, adding new enemies to the mix and forcing the player to change-up their priorities, though not their tactics. After each wave has been completed the player is offered a breakdown of their performance and can choose between a selection of three random upgrades, including a laser sight, grenades and explosive ammo. Sadly, none of these upgrades add the kind of additional flavour that you might be hoping for. 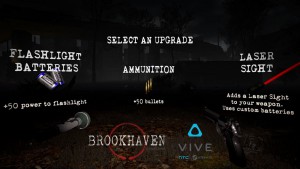 The Brookhaven Experiment tries to build tension out of limitation – there’s an ammunition counter on the side of your pistol and the torch has a limited battery life – however the melee combat that becomes your only option when these resources have been depleted is less than encouraging. The player feedback is minimal, leaving you to wonder whether your wild swinging and lunges for survival are making any impact at all until the time an enemy suddenly drops seemingly without indication that it had been taking damage to that point.

The Brookhaven Experiment is flawed in many respects, so much so that in its current state it would be impossible to recommend over the many similar FPS experiences now available or soon coming to the HTC Vive. The hope would be that Phosphor Games has been made aware of the lifeless nature of The Brookhaven Experiment and the many issues therein, especially when compared to the competition, and has made significant changes to improve the videogame both in the level of immersion it offers and the mechanics that would compel the player to replay. As it stands, The Brookhaven Experiment is unlikely to warrant more than just a few minutes of your time as a low-interest evaluation.