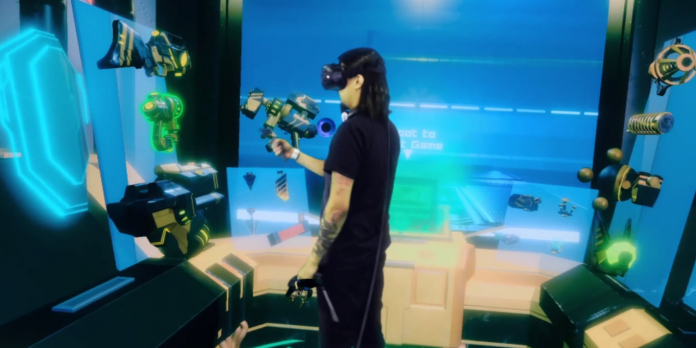 VRFocus caught up with The Secret Location during the Electronic Entertainment Expo (E3) last month as its latest virtual reality (VR) title was being demoed, Blasters of the Universe. There was the initial thought process of hoping it wasn’t going to end up as another shooter much like Space Pirate Trainer and the many others that have followed its quite simple ‘ABC 123’ formula, but what sets this title way far beyond than those is its replayability due to how varied and genuinely charismatic the gameplay is.

The first element to Blasters of the Universe is much less choosing your weapon than building it. There are a number of different components you have to piece together, which at first can seem a little pointless and time consuming, but after the first run through the importance is ever acknowledged. This is, by far, the most important part to the whole of the eperience. This level of choice in a videogame has proven time and time again in AAA titles to spark a different kind of interest in the player, and Blasters of the Universe does this very well.

The principle of the gameplay itself is simple enough: shoot the enemies and block or avoid the oncoming lasers. However, with your choice of personalised weapon the gameplay could go a number of ways, and this is the essence of what makes Blasters of the Universe replayable on a different level than titles of a similar nature to it. In terms of utilising the full use of the HTC Vive room scale tracking, the player is kept within their own cage that the enemies will advance towards, but their attacks will only count if they strike your head. Not having to look at every body part when trying to mow down mutants gives you more time to concentrate on reloading your gun with your selected ammo, letting the player balance priority of attack and defense.

When it comes to the enemies and trying to understand them, this is where the title really comes to life. At first, they look like a bunch of misshapen misfits that were created in a random generator, but it takes understanding the backstory to truly understand the depth that the title goes. The main evil overlord that hovers in front of the player is actually a power-crazy arcade nerd from the 80s who got trapped with VR when it died down, and due to sheer loneliness he tried to clone himself. This then resulted in the mutated minions that vary from little baby robots to floating demonic heads.

Each of the enemies vary in power and tactics of trying to break down your life bar until you are finished with. Although it isn’t possible right now with this upcoming build, there are plans for more levels and even a final fight with the nerdy overlord, which could result in further unraveling of narrative and plot. 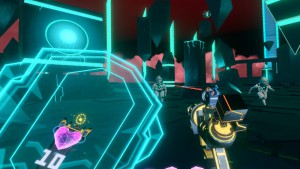 Blasters of the Universe not only goes beyond what has already been set as the benchmark for these types of shooters, but it also has an effortless air of personality that hasn’t been forced and isn’t found in many VR videogames. It is currently coming soon to the HTC Vive on Steam Early Access, and it is very much worth keeping an eye out on VRFocus for its official release and an interview with one of the team members from The Secret Location.