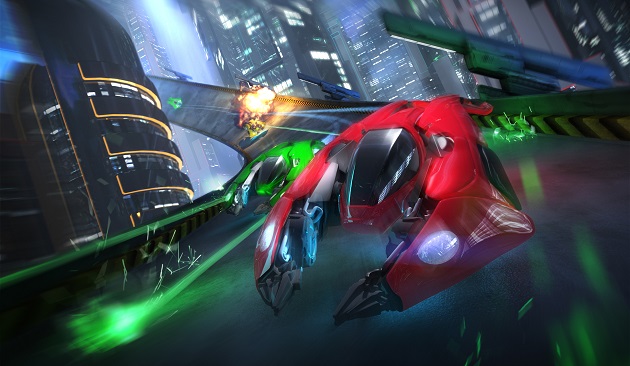 Bank Limit: Advanced Battle Racing finds itself in an unfortunate position as it prepares to launch for virtual reality (VR) head-mounted displays (HMDs); it’s got some serious competition. While many titles on the Oculus Rift and HTC Vive are currently alone in their genre, developer Tastee Beverage Studios has decided to tackle a style of racing videogame that we’ve already seen in Tammeka Games’ Radial-G. But is there enough room for two sci-fi racers in VR’s early days or is the upcoming title going to get lapped?

Starting out, Tastee Beverage Studios has clearly thought about its cockpit design and how VR can be used to simulate concepts we’ll want to see for real in the future. Details like speed and energy are displayed as holograms that are clear to read. On the fantastical side, courses wind around complex environments that defy reality. They’re impressive in design, although they could certainly do with some visual polish. Metallica textures lack shine and detail, giving the entire experience an unwelcome ‘Unity asset store’ feel. If the team really hopes to compete, it should seriously consider going back over its presentation.

In fairness, though, the grounded portions of Bank Limit: Advanced Battle Racing‘s have more in common with the long-missed Wipeout games than its VR rival. For the most part you race on flat surfaces rather than tubular tracks though still defying gravity just as often. When racing from a first-person perspective on the ground you’ll want to be thinking just as much about returning fire with the other 24 opponents than you will mastering corners. There’s a satisfying element to keeping a lock on an enemy with machine gun fire and chipping away at their health before they explode into a ball of flames. It gives this a ‘Death Race’ feel that helps inject a little thrill into the experience.

Racing is mechanically sound with a gamepad, though perhaps doesn’t quite convey the sense of speed that it’s seeking to. That’s another presentational issue, but it translates into gameplay problems when you can’t quite capture the feeling of shooting down a path. It can be difficult to replicate speed in VR, especially without making your players feel sick, but the laps VRFocus completed didn’t quite capture the energy of violently fast competition. 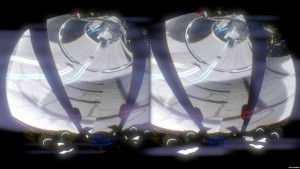 Where the title really comes alive, though, is when you take flight. You’re not just racing on flat surfaces here; portions of Bank Limit: Advanced Battle Racing’s involve navigating deep space, staying on course through a set of rings that guide the way. Here your fellow racers turn from a pack into a swarm, gliding around and becoming that much harder to hit. This section gives the title a much more intriguing identity than it’s previously let on and makes you long for more of it. Hopefully the full version offers more of these types of races because they’re easily the best part of the race.

Right now, Bank Limit: Advanced Battle Racing feels like it needs a little more polish, then. Tastee Beverage Studios has a mechanically proven racer in its hands, it just needs to ramp up its production values to provide the excitement. If it can do that before launch, then maybe it’s Radial-G that will have the serious competition.