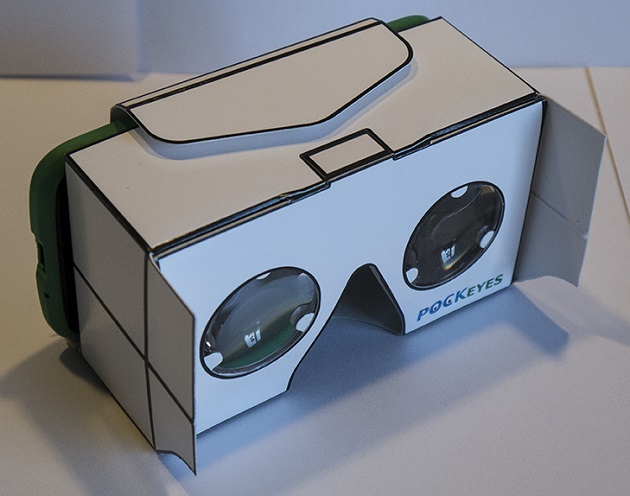 The easiest way for the majority of the general public to experience virtual reality (VR) has been through smartphone head-mounted displays (HMDs) like the Google Cardboard headset. The major issue with these type of headsets is their bulky nature for transportation. Now French startup VRV Prod is looking to change that with a new portable HMD design called POCKEYES.

POCKEYES is a completely foldable headset that can fit in your pocket, allowing users to enjoy VR and 360 degree video experiences anywhere they like. Made of cardboard and with two integrated lenses, just add a suitable device and away you go, where ever you see fit.

VRV Prod will be taking POCKEYES to the Consumer Electronic Show (CES) 2016 in Las Vegas, Nevada, next week. The company is planning on going down a similar route to Google Cardboard, allowing other companies to brand the headset for their own marketing purposes. But it’s becoming a crowded market, Google teamed up with The New York Times (NYT) in October to give the newspapers 1.1 million subscribers a free Cardboard HMD. And there’re other companies doing just the same, but with POCKEYES focusing on the portability factor that may give them the edge.

With 2016 going to be an exciting year for VR, consumers are going to have a lot of choice in how they can consume VR experiences, from portable devices to tethered, PC-based units. CES 2016 will be kicking off the new year with lots of expected announcements, and VRFocus will be there to bring you the latest details.

The post POCKEYES to Exhibit at CES 2016 appeared first on VRFocus.