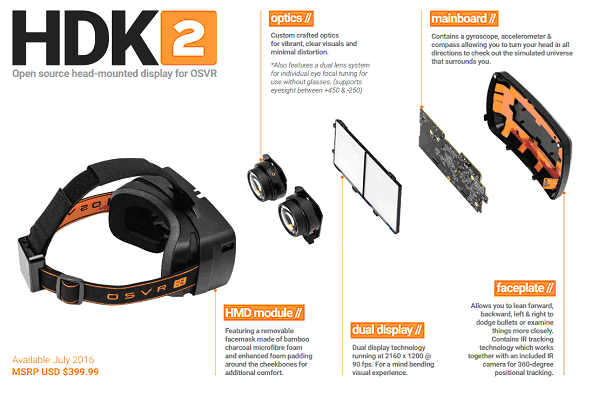 The Open Source Virtual Reality (OSVR) platform has gone through several iterations since it was launched by Razer in collaboration with companies including Sensics. Earlier this year in March, the OSVR Hardware Development Kit (HDK) v1.4 launched, with a diffusion film and extra padding among some of the new features. Announced today comes a new hardware update called HDK 2, with a significant new addition, dual screens.

The OSVR HDK 2’s upgraded display features an OLED dual-display giving a total resolution of 2160×1200, putting the head-mounted display’s (HMD) visual experience on par with Oculus Rift and HTC Vive. Also added is an Image Quality Enhancer (IQE) reducing the screen door effect. This means that the hardware specifications for OSVR HDK 2 are capable of displaying VR experiences at 90 frames-per-second.

The full specifications are as follows:

Razer will be demoing the OSVR HDK 2 at its booth during this weeks Electronic Entertainment Expo (E3) in Los Angeles, California. Also available for demo at E3 will be the Gloveone motion tracking gloves from Neurodigital Technologies. Upon public release, the gloves will be available as a controller option for the HDK and all OSVR supporting HMDs in the open ecosystem.

VRFocus will continue its OSVR coverage, reporting back with the latest updates.