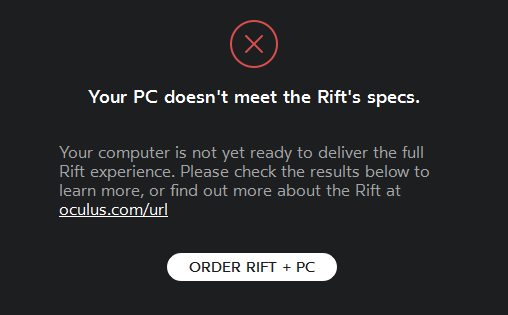 The Oculus Rift costs $599 USD, but that might not be the cheapest item you have to pick up to actually use the virtual reality (VR) head-mounted display (HMD). The kit also requires a powerful PC (recommended specs below), in order to run titles that deliver 90fps gameplay among other features. Of course, not everyone will know if they have a PC capable of running the Oculus Rift, which is why Oculus VR has today launched the Oculus Compatibility Tool to help everyone check that their rig is up to snuff.

The tool can be downloaded from a direct link over on Oculus VR’s blog in which it announced the opening of pre-orders for the Oculus Rift, with shipping starting on 28th March 2016. After a quick install, you’ll be able to quickly find out if your machine meets the requirements in terms of a Graphics Card, Processor, Memory, Operating System and USB Ports. A shot of the system in action can be seen below, clearly marking out where a machine is up to standard and where it isn’t. An option to head to the pre-order page is also available.

For those that don’t meet the requirements, Oculus VR will next month be launching pre-orders for Oculus Ready PCs, a set of rigs from the likes of Asus, Dell and Alienware that will meet the specifications. These start at $950 and Oculus VR will be offering special bundles to pick one up with an Oculus Rift starting at $1,499, meaning savings of at least $50 will be possible in some cases. It’s not yet clear exactly which machines will be available as part of the deal at this point in time.

For the latest updates on the Oculus Rift, check back with VRFocus. 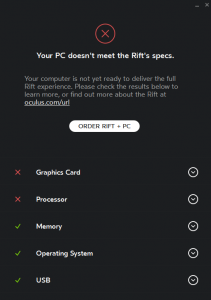 The post Oculus Launches Oculus Compatibility Tool to Check if Your Rig Can Run Rift appeared first on VRFocus.