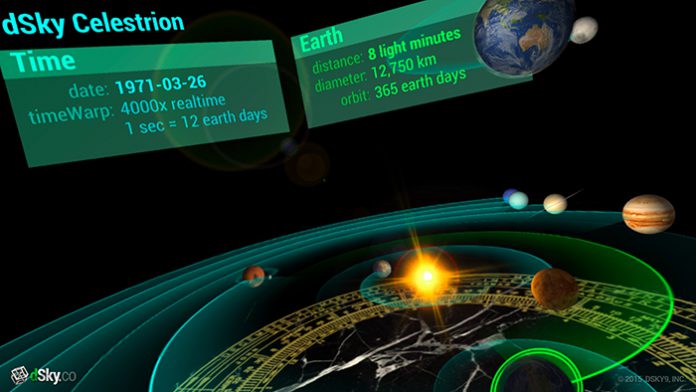 When it comes to videogames relating to space itself, that is to say the facts of space and not games involving travelling through space such as your EVE Valkyrie’s or Elite Dangerous’s arguably the best in the field by a distance is the Universe Sandbox series.

A combination of serious science with the ability to simply mess around with the rules of physics. Want to swap Pluto and Mars around? Sure. Want to increase the sun 500% in size? Go for it. Want to send Saturn careening off on a new orbit? Sounds good. Let’s try it. What Universe Sandbox isn’t however is virtual reality (VR) compatible. At least not yet. Not only that there isn’t anything particularly close to it either.

dSky VR: Celestrion is the closest to date. An Oculus VR Share title for the Oculus Rift DK2 head-mounted display (HMD), this tech demo places you inside a VR orrery – a model of solar system – allowing you to see how the planets and their moons move around each other. Additionally it acts as an educational tool, presenting facts and posing trivia questions for you to answer.

You can take a look at this impressive looking VR experience in the video below.

New To VR will be back on VRFocus tomorrow with another new VR videogame or experience.

The post New To VR: Investigate the Solar System close up with dSky VR: Celestrion appeared first on VRFocus.