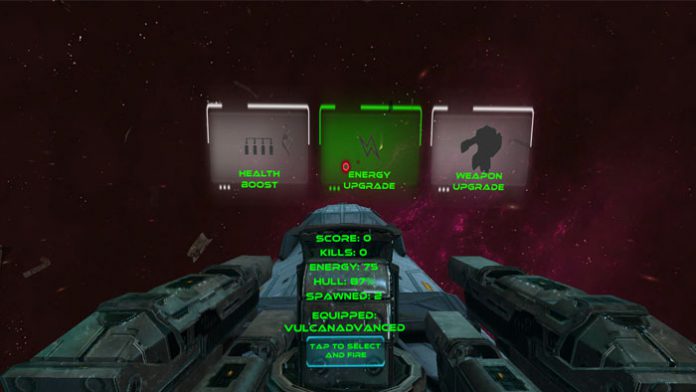 Traditionally in media, be it games or films, signing up to any kind of space-based military is tantamount to accepting the imminent addition of a tentacle stabbing you through your torso or alternatively having your limbs ripped off and eaten as a snack. No, life is neither good nor a particularly long one for general rank and file.

The bad news for you is that this type of solider is exactly the sort you’re playing in Turret Attack VR, the good news is your destiny is entirely in your hands.

As the title suggests Turret Attack VR has you take on the role of a defender onboard your spaceship. As the operator of a mounted laser turret your task is deceptively simple, move your turret, locate enemies or other threats and blast them out of the sky. Danger could come from anywhere so you must be sure to look about in order to find and destroy everything that might find and destroy you. The longer you last through the twenty different levels the more powerful the weapons that can be unlocked.

Compatible with the Oculus Rift DK1 and DK2 head mounted display (HMDs), a Google Cardboard version of this videogame is also available on the Google Play store. You can see a preview video for the app below whilst more technical/setup information can be found via the store pages.:

New To VR will back tomorrow on VRFocus where we’ll be looking at an application on Oculus Rift possibly as far removed from this one as it is possible to get. Be sure to join us then.

The post New To VR: Defend Your Ship From Allcomers In Turret Attack VR appeared first on VRFocus.