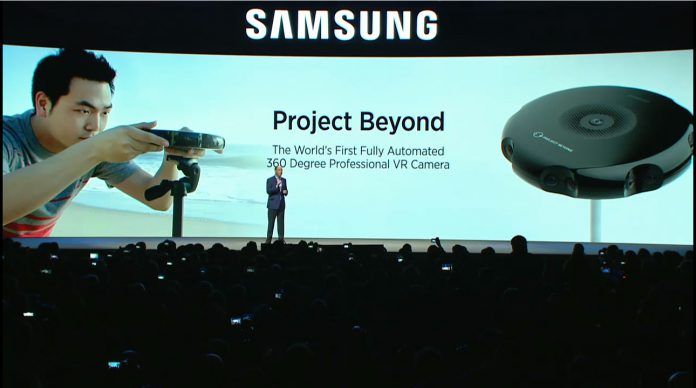 Last month VRFocus reported on the news that Samsung had trademarked the name Gear 360. Signs pointed towards this possibly being the full name for Project Beyond, a 360 degree camera designed for use with not only Samsung’s latest range of Galaxy smartphones but also the Gear VR mobile-based virtual reality (VR) head-mounted display (HMD). This week a new report is claiming that the Gear 360 is nearing a full reveal, and has some significant changes over the version of Project Beyond first seen back in late 2014.

Sammobile is reporting that Gear 360 will be unveiled at Samsung’s next Unpacked press conference on 21st February 2016. A teaser for the event debuted earlier this week and prominently featured Gear VR, while also teasing that the event would reveal ‘The Next Galaxy’ smartphone, largely thought to be the Galaxy S7. Sammobile reports that Gear 360 will be compatible with the Galaxy S7, though can’t confirm if it will also support last year’s phones, which were the first to support the consumer version of the Gear VR itself.

According to the report, however, there are some significant changes in store for the device. When VRFocus reported on the reveal of Project Beyond all the way back in November 2014 the kit boasted 16 sensors that enabled it to record in full stereoscopic 3D. The new article, though, states that the kit now has two 180 degree fisheye lenses that will stitch content together. Though unconfirmed, this would suggest that Gear 360 has dropped 3D support and will instead only support 2D, but this is just speculation on VRFocus‘ part.

It’s also important to note that the kit is described as an ‘offshoot’ of Project Beyond here, so it could be the original version is still in the works. It did, after all, recently show up at the 2016 Consumer Electronics Show (CES) looking identical to the original version.

Elsewhere, Gear 360 is said to have its own battery and on-board memory storage. Options for the device include a ‘VR view’, while resolution captures in 3840 x 1920 pixels when shooting in dual lens mode and 1920 x 1920 pixels in single lens mode. Content can be viewed on a Bluetooth connected phone, but it’s unconfirmed if Gear VR support is still included.

Keep reading VRFocus for the latest updates on Gear 360 and all other Gear VR related content.