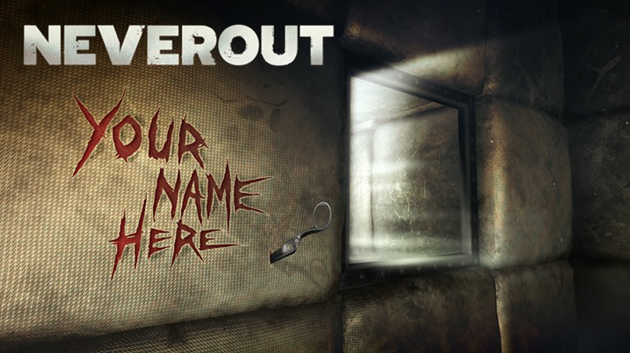 In January a new virtual reality (VR) puzzle videogame landed on the Samsung Gear VR mobile head-mounted display (HMD), called Neverout. Since then the title has received positive feedback, including a five star review from VRFocus. Now developer SETAPP has launched a competition to get your name in the end credits room of the videogame.

The competition can be entered in one of two ways. Firstly by completing the title players will be presented with a big red button. Pushing this then sharing a screenshot from the game on Twitter with #SignNEVEROUT. The second way to enter is sharing your thoughts on Twitter using the same hashtag. The contest ends on 31st, March 2016 and further info and links can be found here.

Neverout is a tense puzzler set across a series of 60 small, claustrophobic rooms. These rooms resemble padded cells, with only one way out. Each room can be flipped, allowing the player to walk on the ceiling and walls in order to escape. Each time they complete a challenge they’ll be able to continue onto another room.

It can be purchased through the Oculus Store for £5.99 GBP, and VRFocus will continue its coverage of SETAPP and its VR projects, reporting any new updates.