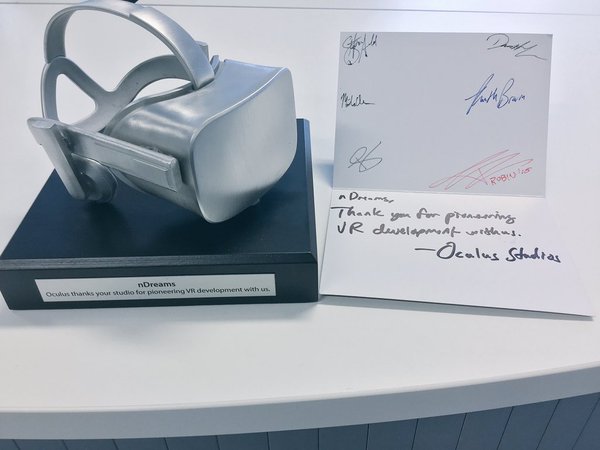 Earlier today VRFocus reported on the news that EVE: Valkyrie developer CCP Games had received a trophy from Oculus VR, thanking the team for its work as a ‘virtual reality (VR) pioneer’. The award resembled a silver Oculus Rift head-mounted display (HMD). As you might expect, CCP Games is far from the only studio to have received one of these trophies. As the day has gone on a handful of other developers have received their own awards from Oculus VR as a way of thanking them for their work on software for the upcoming HMD. 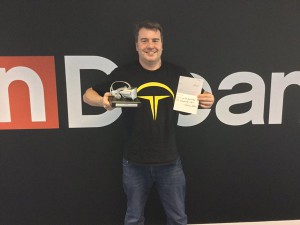 First up is nDreams, the UK-based studio that’s worked on a wide range of VR projects over the past few years. The team got started with SkyDIEving and has since released 2 projects for Oculus VR and Samsung’s Gear VR mobile HMD in Gunner and Perfect Beach. nDreams is also currently working on The Assembly for the Oculus Rift, which will also be appearing on the HTC Vive and PlayStation VR HMDs. The team took to Twitter to say: “Look what just arrived! Thank you @oculus for the stunning memento, we’re thrilled to be part of the #VR revolution!” 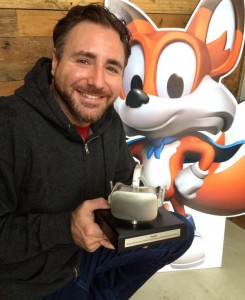 Lucky’s Tale developer Playful is next. This upcoming third-person platform based adventure is perhaps the first title to be revealed that’s full exclusive to the Oculus Rift and is even being published by Oculus VR itself. Lucky made his debut back in 2014 and has since been making regular appearances at industry events around the world as part of Oculus VR’s official showcase for the Oculus Rift. 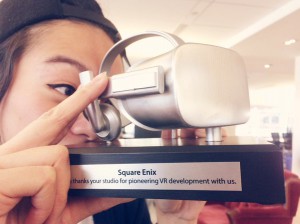 Then there’s Square Enix Montréal. Interestingly the developer hasn’t yet announced an Oculus Rift project, although a visit from Oculus VR last week suggested one might be in the works. Instead, the developer has adapted its popular mobile spin-off, Hitman GO, to work with the Gear VR. The new version of the title is yet to be released. 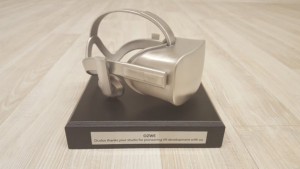 Another mobile VR developer is OZWE, which has developed both Anshar Wars and its sequel for Gear VR. The studio noted that it was ‘very proud’ as to have won an award. 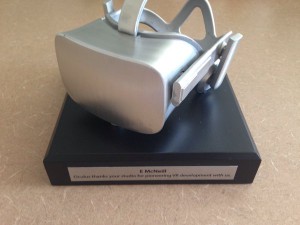 Finally, Darknet developer E McNeill was also sent his own trophy. McNeill’s hacker title is still on its way to the Oculus Rift, but was one of the first titles to launch on Gear VR all the way back when a premium store didn’t even exist. As such, McNeill’s title was free until the ability to charge became available later down the line. The developer also notes that Land’s End studio Ustwo Games has received a trophy, though the team is yet to comment on this for itself.

Expect more of these trophies to pop up over the internet in the coming week as there are plenty of other developers that are ‘pioneering’ VR software. VRFocus will continue to follow the latest on Oculus VR and the Oculus Rift, reporting back with any further updates.