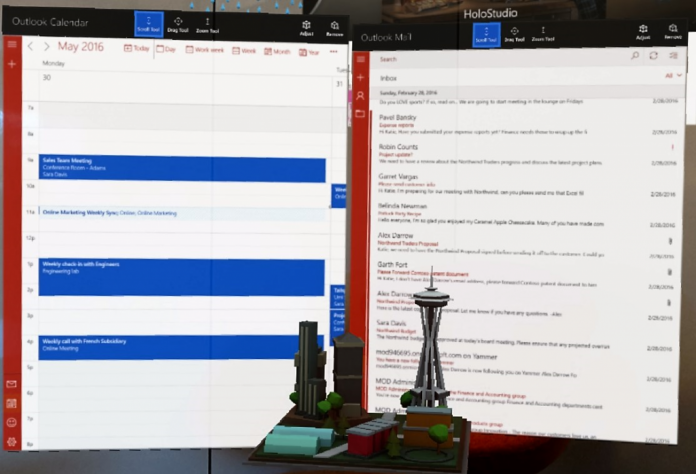 This week alone we’ve seen augmented reality (AR) being used for some exciting things, from Visa testing it as a new e-commerce solution to Aecom piloting the technology as a construction and engineering aid in a project that will span three continents. These are signs that AR is going to be capable of incredible things that could alter the way our lives run and businesses operate. But what about the smaller applications? We’re seeing what AR will be capable of on a large scale but how will it change our lives in little ways? Microsoft is giving us an example of this by announcing that it’s releasing dedicated HoloLens AR apps for its calendar and Outlook email service.

They’re not the most exciting apps in the world, and to be honest visually they don’t seem to be all that different from their desktop counterparts, however, using them with the HoloLens’ AR technology does add some interesting and useful features. Microsoft say that when using the Outlook Mail app on HoloLens you’ll be able to pin your inbox to your office wall “to stay on top of emails while simultaneously interacting with other digital content in your real world” and you’ll be able to do the same for you calendar, too. Microsoft said that as Outlook Mail and Calendar are apps built on the Universal Windows Platform (UWP) it was easy for their developers to bring them over to the HoloLens which runs Windows 10, meaning there wouldn’t be any awkward UI changes for users switching between the HoloLens apps and those on PCs, tablets, and phones.

Though it will probably be a while before we see offices bringing in HoloLens headsets for their staff, this is an interesting insight into the smaller but still useful ways AR technology could be brought into our lives. Currently the HoloLens headset is only available to developers in the US and Canada for $3000 but Microsoft is inviting these developers to download the Outlook and Calendar apps and give feedback on the developer forums.

VRFocus will continue to bring all the latest HoloLens news as and when it happens.