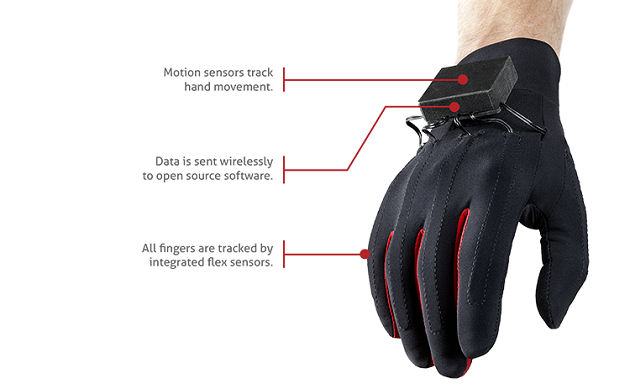 Since the re-emergence of virtual reality (VR), one of its biggest hurdles has been input. How best to control an immersive virtual world, naturally aiding in the feeling of presence. One of the most iconic themes that people think of when referencing VR is hand control, namely gloves. And since head-mounted displays (HMDs) like Oculus Rift have existed a new swath of technology companies have sought to make this idea a reality at a cost effective price. Manus Machina a Dutch company based in Eindhoven, has been developing the Manus VR Glove, which it unveiled at the Electronic Entertainment Expo (E3) back in June. Now Flexpoint Sensor Systems has announced Manus Machina has placed more orders for its sensors, possible indicating a launch may not be far away.

The Manus VR Gloves are pair of wireless, flexible, finger-sensing gloves that are designed to be worn in conjunction with VR headset. The gloves have flex sensors on each of the fingers, sensing when the fingers are bending. It uses an IMU module on the back of the hand to track the rotation, yaw and the downward rotation of the hand, giving it nine degrees of freedom (9DoF).

Flexpoint Sensor Systems sensor is a key component of this and the company states the importance of this market: “It is rapidly becoming a truly impressive portfolio for us. In the recent past, we have announced companies who leverage the Bend Sensor(R) such as mi.mu – award winners at the Microsoft Wearable IT Fashion Tech Awards in Berlin, and Mettis Trainer – Honoree at the 2016 CES awards,” said Paul Sexauer, Vice President Sales & Marketing for Flexpoint.

When Manus Machina plan to launch the gloves hasn’t yet been announced, but pre-orders are open to give the company an idea of demand from developers. On the pre-order page it says: “We are currently not accepting payments, but will notify you two months before shipping.” With the Oculus Rift due in Q1 2016, and HTC recently announcing its HTC Vive headset would be commercially available in April 2016, Manus Machina maybe waiting to release the gloves when the VR buzz is at a high.

VRFocus will continue to bring you all the latest news from Manus Machina, as further announcements are made.