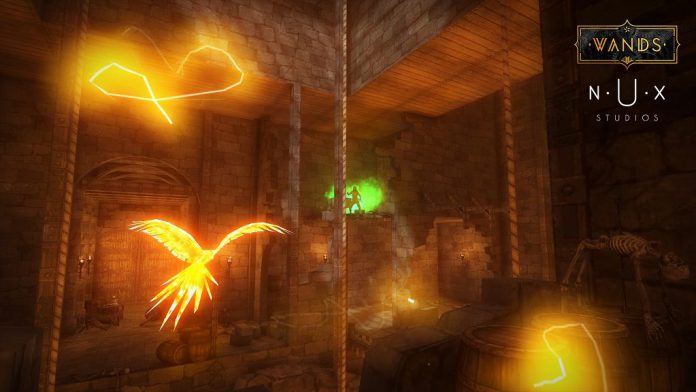 Regular readers of VRFocus may remember a title from last year called Wands: The Magic Duel by Swedish studio Univrses. This year development details on the videogame have been silent, but now its re-emerged with a slightly tweaked title and a new studio name. Its also been revealed the project is due to launch this month for the Gear VR head-mounted display (HMD).

Now just called Wands, the team developing the videogame is now NUX Studios. There’s been no indication if Univrses has just had a name change or if it’s a new team, but Ricky Helgesson, CEO of Univrses is now a producer at NUX Studios.

A purely player verses player (PvP) title, Wands combines magic with a steampunk Victorian era design. Players take control of a sorcerer or ‘Wielder’ who must train and learn ancient spells to use against other players in combat.

NUX Studios has launched a new trailer for Wands, showcasing some of the locations, spells and gameplay on offer. Being a Gear VR title that doesn’t seem to need a separate Bluetooth controller, movement uses the teleportation mechanic. While spells on offer include projectiles such as Devils Spit (fireball)and Flaming Phoenix (a fiery bird) to defensive magic like the Shield of Light.

“Wands is a uniquely magical, competitive, gritty, and above all fun mobile VR experience set in a 19th century steampunk version of London,” said Helgesson. “This is the culmination of almost two years worth of work. Our team is thrilled to bring split-screen spectator mode and a global leaderboard alongside our mystical game to mobile VR fans everywhere.

Wands will be available for Gear VR on 18th August 2016. Support for other platforms is planned for later this year, although the studio hasn’t revealed which.

VRFocus will continue its coverage of Wands, reporting back with any further updates.