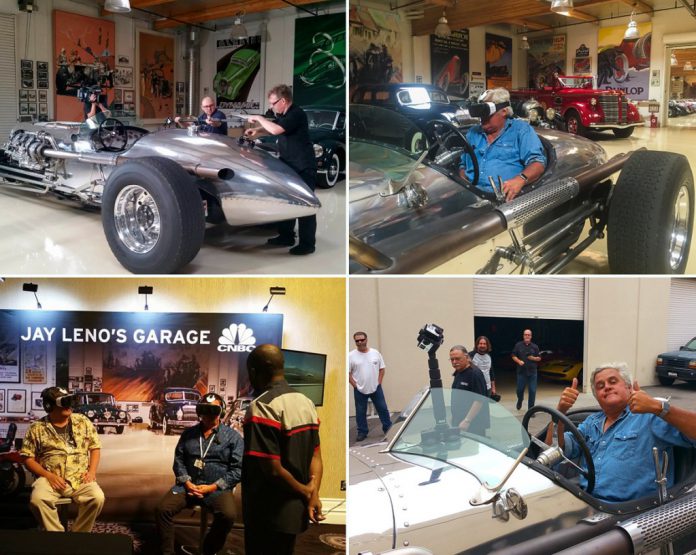 Virtual Reality (VR) is certainly begining to making its mark on the US television circuit. For instance in recent months Conan O’Brien released a Conan360 video app for his San Diego Comic Con appearance. SyFy continue to update an app promoting a television series of theirs not even released yet. Whilst only the other week Stephen Colbert demoed a Samsung Gear VR on The Late Show. Now a brand new video application has just been released, made by Koncept VR and commissioned by CNBC and Brightspot Creative for new show Jay Leno’s Garage.

The app, which can also be found below as a YouTube 360 experience, sees you take a ride alongside former chat show host and well known car buff Leno in one of his custom made card creations, a uniquely made car with the engine from a M47 Patton tank.

The host himself was impressed with the technology, having been shown the possibilities with a Samsung Gear VR by Koncept VR’s production team.

“Oculus Rift is one of my favourite bands. The whole punk rock scene… it’s really good.” Joked Leno, before explaining how his previous experiences with similar technologies had him be used to limits on his field of view.  A change for the better that he had to get used to. “To do the whole 360 experience, it’s fascinating. It’s really amazing.”

VRFocus will continue to bring you updates on the work of Koncept VR as well as other projects and tie-ins using both VR and AR. You can find out more about the Jay Leno’s Garage exerience on Koncept VR’s website here.