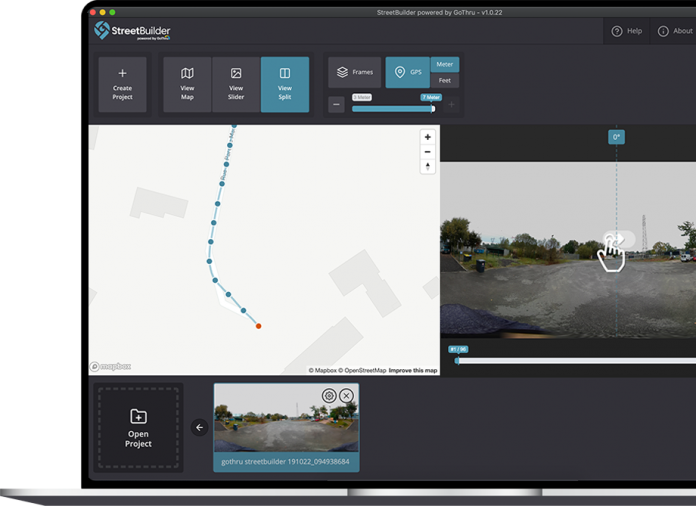 
You can now use the 360 video from any camera to create a virtual tour on Google Street View, using GoThru’s new StreetBuilder.

Here’s the demo and tutorial:

How to work with GoThru StreetBuilder to publish a 360 video to Google Street View from Alin Bugeag GoThru on Vimeo.

The team behind GoThru – the first professional moderator that allows users to create a constellation out of panoramic images and publish as walk-in tours directly to Google Street View – is set to expand their platform, enabling users to create Blue Lines on Google Maps.

The vast majority of Google Maps users use Street View for prospecting places that they would like to visit. But not all parks, hiking trails or streets are mapped by Google. With the help of StreetBuilder desktop application, people can now update or add new images to Google Street View, by capturing their own panoramic footage using any 360 cameras for a better map and world.

Compatible with all 360° cameras, StreetBuilder allows for the extraction of panoramic images (and GPS data, where available) from videos, pushing them to Street View through the GoThru platform, regardless of whether the camera is GPS-enabled or not.

Alin Bugeag, CEO at GoThru Media Inc, said: “Following the success of our GoThru Moderator, we are pleased to announce the launch of StreetBuilder, an innovative platform to complement GoThru’s functionality.

Access to recent and accurate map data is becoming increasingly pivotal to the digital world, and while Google Maps has changed the future of mapping as we know it, there are still streets, buildings, and points of interest that are missing. StreetBuilder enables anyone to put these places on the map.

The software smartly predicts the optimal distance between panoramas and allows non-GPS footage to have specific frames selected, with easy navigation and visual display of where extracted images will sit on the map. StreetBuilder was developed to enable our community to access even more resources to help to create better maps.

The more traditional process of updating Street View data is notoriously slow and expensive, yet StreetBuilder, along with Google, have partnered to develop an ecosystem that allows anyone with a 360 camera to do that easily.

Locals know better what it is missing from their map and with StreetBuilder they bring Street View up to date! ”

GoThru is a platform developed to offer multiple tools to Google Trusted Photographers and implicit to their customers. GoThru Moderator is the best moderator outside of Google that provides the technology to create a constellation out of panoramic images and be published directly on Google Maps and the Street View Application. Besides this, GoThru offers a multitude of tools that have been created at the request of the photographers or to help them sell the Google Tour better.

The post How to create a Google Street View virtual tour with any 360 video with GoThru StreetBuilder appeared first on 360 Rumors.