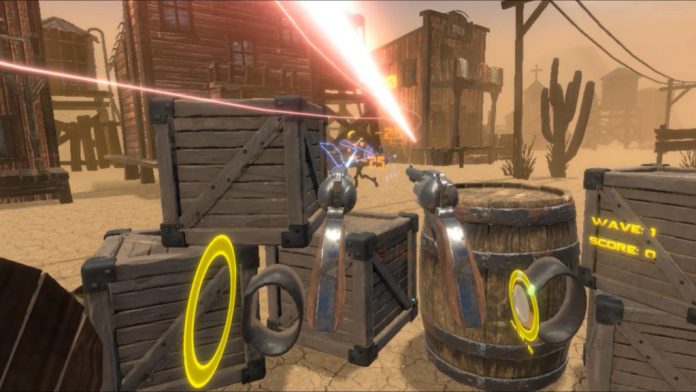 Set in a just bowl of a town Cogs and Cowboys has players facing off against waves of steam-powered machines using a mixture of traditional and sci-fi-based weaponry. The early access version includes six weapons: Double Barrel Sawed Off Shotgun, Lever Action Rifle, Gatling Rifle, Scoped Revolver Sniper Rifle, Heavy Pistol, Rapid Fire Pistol. Players will also have use of two abilities; a Wrist Shield that expands when activated but then needs to recharge after taking a certain amount of damage; and Slow Motion so that dodging enemy fire becomes easier as well as lining up shots. This version  only includes two enemies at present, a Small Grunt and Large Golem set in one location Town Main Street.

MostWanted Game Development has stated that when fully released Cogs and Cowboys will include a total of nine weapons, with knives, dynamite and tomahawks being added. There will also be more locations, enemies and abilities added.

Today the studio has released its first update that adds a Main Menu, Story Mode Teaser, Weapon Balances/fixes for all weapons, the small pistol now has increased damage by 100 percent, increased reload speed 50 percent, and the double barrel shotgun now has decreased spread by 1 degree in all directions plus increased range by 10.

Cogs and Cowboys is available for a limited time discount. Until 17th August 2016, players can get a 30 percent discount off the title, dropping the price down from £4.79 GBP to £3.35.

For all the latest VR releases on Steam, keep reading VRFocus.