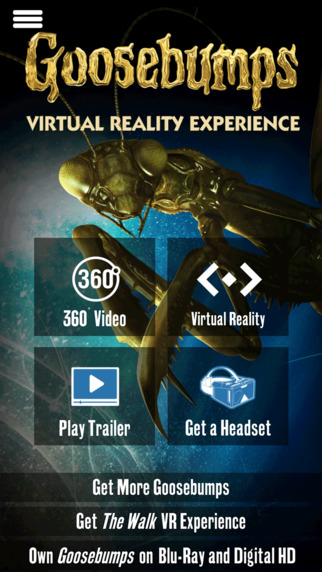 Over the last few months VRFocus has reported on a couple of virtual reality (VR) centric experiences themed around the Goosebumps franchise and film. From today Sony Pictures Home Entertainment (SPHE) has launched the Goosebumps VR experience app for Android and iOS devices for free.

For the experience players hop in the car of R.L. Stine and help the author navigate the windy streets as you try to escape a ferocious, giant praying mantis. The app has a 360-degree mode so it can be used on smart devices without a head-mounted display (HMD), but for the most immersive experience its best to use a headset like Google Cardboard or Merge VR.

And for a limited time the Goosebumps Blu-ray 3D, Blu-ray and DVD in the US will include a special discount offer for the Merge VR Goggles. Further information on the offer can be found at www.GoosebumpsVR.com.

While availability is only for iOS and Android, VRFocus has played a Samsung Gear VR version at the recent Consumer Electronic Show (CES) 2016 in Las Vegas. There’s been no confirmation as yet of an official release for the Gear VR headset though.

VRFocus will continue to follow all the latest VR movie collaborations as further announcements are released.