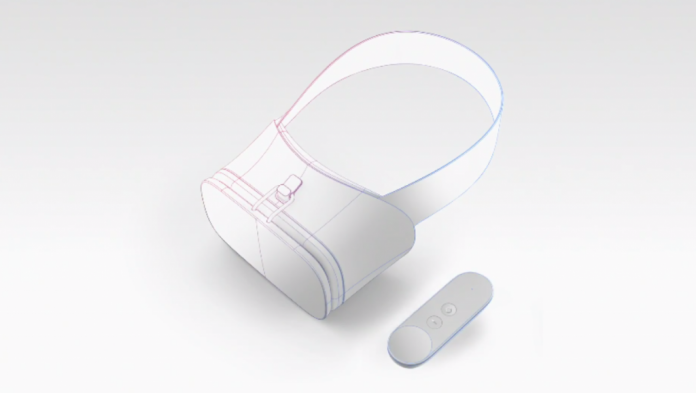 At the Google I/O conference today the company revealed the first details for a new mobile virtual reality (VR) head-mounted display (HMD) called Google Daydream. Not a great deal of information got unveiled regarding the actual headset itself, the company merely showed a line drawing of the device alongside a controller. But in his keynote speech Clay Bavor, Vice President of Virtual Reality at Google did seem to indicate the design might follow in the footsteps of Google Cardboard, with a flexible approach to its manufacture.

In his speech Bavor said: “Because it’s something you need to wear there’s so many things you need to get just right. It has to have great optics. It has to be comfortable. The materials need to feel good and it needs to be really easy to put on and take off. We’ve taken what we’ve learned in all of these areas and created a reference design for headsets that will work seamlessly with Daydream ready phones. We’re sharing this design with partners across the ecosystem and there will several of them coming to market with the first available this Fall.”

Talking about a ‘reference design’ could refer to the company’s previous approach to its first mobile HMD. While the Google Cardboard could be purchased from the company directly, the actual design was freely made available online for hobbyists to create their own, or for other companies to utilise for branding purposes. The approach not only gave rise to a multitude of basic designs, it also encouraged other firms to create far more durable versions.

This then encouraged wider adoption of VR as a whole due to the wide scale availability, alongside online services such as YouTube building up content libraries of 360-degree films for people to watch.

Whether this is the case remains to be seen, but with VRFocus revealing earlier that Google Daydream is due to launch in November 2016 there’s only a few months to wait till we find out.

VRFocus will continue its coverage of Google Daydream, reporting back with any further details.