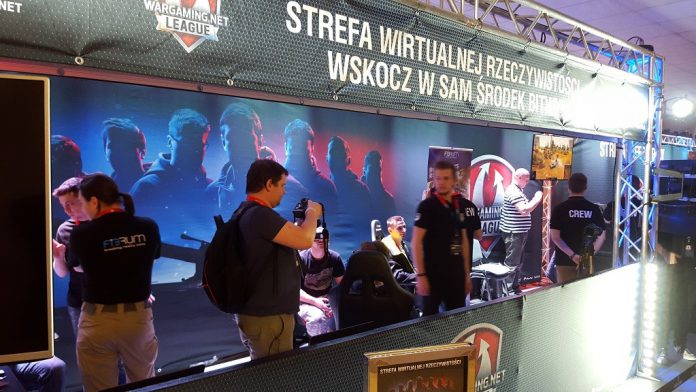 The world of eSports has grown massively over the last few years with competitive teams from around the world going head-to-head for increasingly larger pots of cash. The industry has a loyal following of fans depending on the videogame, whether its Dota 2, Hearthstone, Counter Strike, League of Legends or World of Tanks to name a few. But for the spectators either watching in-person at an arena or viewing the action being streamed online could there be a way of getting in closer, into the heart of the action, and is virtual reality (VR) the technology to do just that?

Recently World of Tanks creator, Wargaming.net, held the titles’ 2016 Grand Finals in Warsaw, Poland and VRFocus was invited along to tryout a new idea the company was looking into. That idea was to give attendees the chance to view the tank battles in VR, giving the ability to immerse themselves in the action, controlling where they went and what they saw, all in real-time. The premise sounds great, and parts of it were, but there were also some issues.

Before diving into a VR world filled with rolling metal fortresses VRFocus sat down with Alex Bobko, Head of Global Special Projects at Wargaming.net to find out how implementing VR into the event came about. Bobko started by saying: “We see how the market is growing up and developing, and we see that virtual reality is probably one of the main trends and main talks in the industry, this year especially. We are permanently experimenting with existing technologies, making some prototypes and to see how current technologies can be used in our projects, like World of Tanks for example.

“Because we are quite sure that the market has not yet matured, so it’s still growing, and we are also sure that for big titles like ours, like free-to-play MMO, you need to have a really huge audience to support the games. That’s why we see that the market isn’t ready yet for big games, and its mainly for indie developers.”

Bobko then commented: “However we want to be part of this story, we have already experimented with 360-degree content, like versions inside the tanks or the tank battle re-enactment that we released last year. But also we asked ourselves what if we add some virtual reality component to our games at the moment. So in December last year, when the Fibrum guys came to us and showed us their prototype, or solution, of how to use virtual reality with World of Tanks, we considered it to be quite a good idea that has potential.”

It’s through Fibrum’s streaming technology that this first incarnation has taken place. VRFocus first saw Fibrum’s VR platform at the CES 2016 in January, where we got a hands-on with its Google Cardboard style head-mounted display (HMD), Fibrum Pro, and a selection of content streamed directly from a PC onto a smartphone. 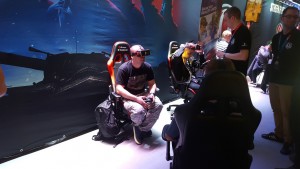 So how did it all work for the event? Walking through the crowds to the VR setup area expectations abounded on what it would be like to watch the quarter finals, semi finals and then the grand finals all in VR, but unfortunately that wasn’t to be. Being such an early idea Wargaming.net naturally didn’t want anything to interrupt the finals or cause any issues, so instead several Fibrum Pro headsets were hooked up to a bank of PC’s that seasoned players attending the event could play on.

Once a match had begun you could then control the camera with a supplied Bluetooth controller, which allowed viewers to switch between two modes. The first gave a fixed third-person view above a tank, this could then be swapped between the two opposing teams. While the second was a ‘free view’ mode giving complete rein across the battlefield. In ‘free view’ the camera could be positioned anywhere you pleased, whether it was high in the sky giving a birds eye view of the carnage taking place below, or right up close and personal, discovering the nuances of each team members tactical play.

There was also the option to bring up the entire map detailing both sides positions and stats helping spectators decide what parts of the battlefield would be best to head to, ensuring the most frantic action wouldn’t be missed.

Wargaming.net worked with Fibrum for five months on the project and in many ways it paid off. Having complete freedom to view the proceedings in immersive VR gave a much closer connection to the battle being played out, showcasing the combination of VR and eSports could work very well indeed, but the current setup would need to be improved upon. 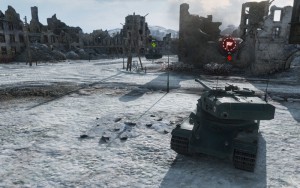 Not being connected to the main event itself meant you couldn’t see the best players in the world in action through VR, that could only be enjoyed by going into the arena and watching on the giant screen setup. And there wasn’t always matches taking place, as all the player spots needed to be filled before a match took place, meaning wait times were at points protracted to say the least.

But this idea is in its infancy and shows future promise. Wargaming.net also acknowledges this with Bobko saying: “We see really huge potential in this kind of mode [spectator] for eSports.” The real test is whether the company can some how enable this type of spectating on a worldwide scale, but a unified approach to VR may need to be implemented before that can happen.

Being able to sit at home with a mobile headset like Fibrum Pro or Samsung’s Gear VR would be good, but being able to use higher end head-mounted displays (HMDs) such as Oculus Rift or HTC Vive would take the experience up a notch. Companies like NextVR are starting to live-stream normal sporting events but these are from the sidelines, giving viewers a ‘courtside’ seat to events. Whereas with eSports you’ll be able to get right into the action, viewing what you want, at the angle you want, when you want.

Hopefully the developer will continue its experiments with VR, taking the technology to future finals. And as it begins to gain further widespread appeal, with more consumers owning HMDs, Wargaming.net may broaden its horizons adding further functionality and support along the way. Then one day you’ll be able enjoy the comfort of your sofa while watching a World of Tanks Grand Final event as you would with the FIFA World Cup or the Super Bowl, only this time you’re right in the middle.