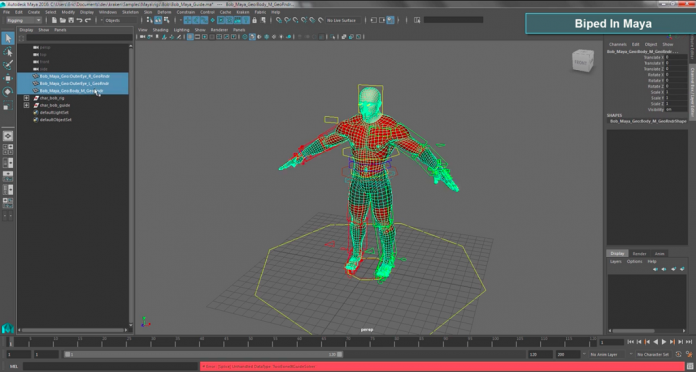 Taking place later this month from 24th – 28th July is the SIGGRAPH Computer Graphics and Interactive Techniques Conference and Exhibition 2016. For the event Fabric Software Inc has announced that it’ll be launching the next version of its Fabric Engine, version 2.3.

The new release will be showcased at the Fabric Engine user group, which takes place on Tuesday 26th July, 10:00 am to 6:00 pm, at the Anaheim Convention Centre, California. The featured sessions will be focused on new and forthcoming additions for Fabric Engine, alongside demonstrating the ‘Fabric for Unreal’ pipeline. There will also be sessions covering VFX & Games, Architectural & Design Visualization and virtual reality (VR).

The team will be hosting a rigging workshop featuring Kraken 1.2, Fabric’s cross-platform rigging solution which launched for free back in June. One of the new features added to Kraken was Biped workflow, allowing developers to quickly create pre-built Biped guides and generate rigs from those guides using new components and menu items.

The Fabric team will also give a joint presentation with Oculus Story Studio at DigiPro on Saturday 23rd July, showcasing how characters rigged with Fabric can add realism to VR experiences within Epic Games’ Unreal Engine.

As part of the SIGGRAPH Talk series PMC and Double Negative will be hosting presentations where Fabric Engine will be featured. MPC will give two presentations about the work they did for The Jungle Book, called Can’t See the Jungle for the Trees and The Trees from ‘The Jungle Book’. While the Double Negative team will present A Flexible Rigging Framework for VFX and Feature Animation.

Registrations for SIGGRAPH 2016 opened in March and tickets are still available. All the early bird offers have now ended and prices do vary depending on if you’re a ACM OR ACM SIGGRAPH Member, SIGGRAPH Student Member, or a non-member. For further details on the programme and tickets head to the official website.

VRFocus will continue its coverage of Fabric Engine, reporting back with any further announcements.