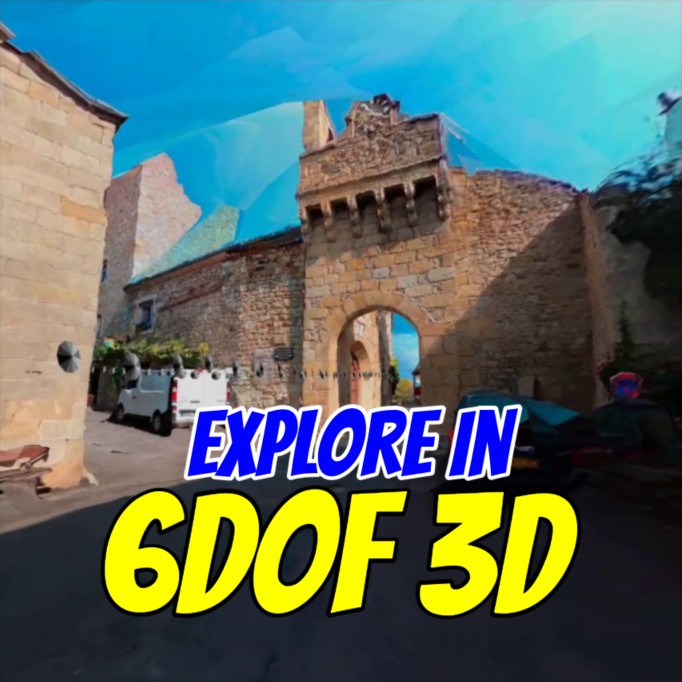 
What if you could create a 6DOF 3D environment just by recording a 360 video with a consumer 360 camera?  Here are sample 3D models generated from a 360 video that you can explore in VR with Oculus Quest, Quest 2, Oculus Go, or Sketchfab, like being able to walk around inside a photo!

Maxime Lhuillier from CNRS/Institut Pascal/UCA has been researching videogrammetry software that can convert 360 videos into a 3D environment.  To capture his videos, he uses a 360 camera mounted on a helmet.  Monsieur Lhuillier uses Garmin Virb 360 or a GoPro MAX both of which are consumer 360 cameras with built-in GPS.  After recording the videos, he uses software that analyzes the videos and converts them into a 3D model.

Unlike very costly LIDAR cameras or conventional photogrammetry that requires thousands of photos, this approach with 360 videos is much faster to capture and uses affordable consumer cameras.

Here’s a demo video of one of the 3D models:

How to view the 3D models

To view the models in VR, you will need to sideload them into your Quest, Quest 2, or Oculus Go (see instructions below).   Once installed, you can view them on your Quest or Quest 2 by going to your Library and selecting Unknown Sources.  The 3D models you installed will be listed there.

On Sidequest, you can use the browser and enter this address: https://sidequestvr.com/user/330664 . Then click on the install button for the model you’d like to explore.

In my case, I tried downloading the models from Sidequest but nothing seemed to be happening.  So here’s another option: download the APK from Maxime Lhuiller’s website, which you can install using ADB (see below) or Sidequest.  Just drag the APK into Sidequest, which installs them on your Quest.

If you don’t have Sidequest, you can also install the APK (see option 2) via ADB.  Here are instructions for using ADB in my ALVR tutorial.

If you don’t have a VR headset, you can also look at the models in Sketchfab.  Here is one of them, with 2.3 million triangles and 1.4 million vertices.

Maxime said that this is purely for research and not intended to be released to consumers.  However, I’m excited to see this technology developed and I hope that we can see software like this for consumers, which I hope will be available in a few years.  Meanwhile, you can check out Maxime’s work on his website. If you have any questions or comments, please post them below.