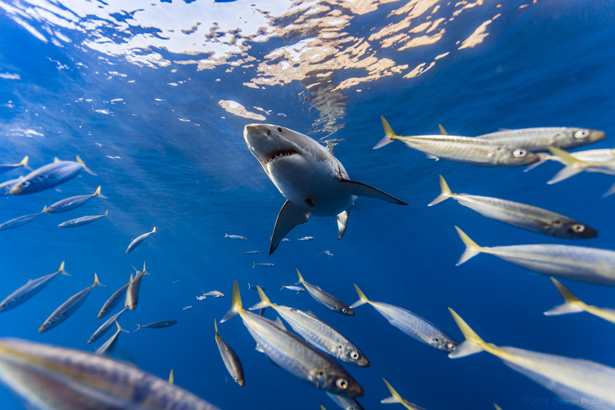 George Prosbt, American diver and photographer, accepted to test the Kolor Abyss rig during his trip to Isla Guadalupe with the Great white shark. To increase immersion feelings, you can enjoy the video by using a head-mounted display.

George, could you introduce yourself?

I am George Probst, and I currently live in Blacksburg, VA, USA. I began photographing great white sharks in 2006 with a simple point and shoot camera in a small underwater housing. After my first dive with great white sharks, I was hooked. I have since been on a total of 8 great white shark diving expeditions, and I have also dived with many other shark species including whale sharks, bull sharks, sand tiger sharks, and nurse sharks.

I believe very strongly in protecting sharks, particularly those species that are listed as vulnerable or endangered on the IUCN redlist. It is my hope that my photography will help bring attention to the importance of sharks to the ecosystem and portray them in a positive light, as opposed to how the way they are often portrayed negatively in the news and media. 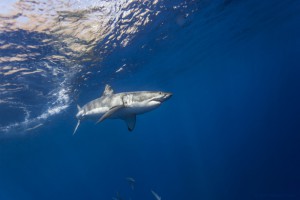 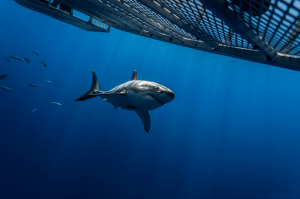 For your trip, you used the Kolor Abyss Rig. How did you find it in doing the job?

Since the Kolor Abyss records in every direction, it was much different than anything I’ve ever used before. With a standard camera, you always know which direction to point the lens, but there is a lens on all six sides of the Abyss! There are certain difficulties in using new equipment and new technology, but for the most part I tried to film the sharks in a similar manner to how I would with a single GoPro. 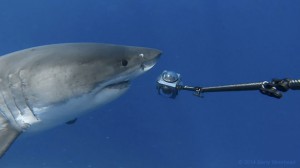 In the footage, we noticed that a Great white shark was quite curious about the gear and came close you

I was afraid for the gear! I have been really close to a lot of great white sharks over the years, so I actually enjoy when they come in close, as long as they are not behaving in an aggressive manner. They are often curious about camera gear, which allows me to get some really nice close-ups. Since sharks have electroreceptors and can detect electrical impulses, camera gear can sometimes pique their curiosity, so they might come up and inquisitively bite a camera or touch it with their snouts. There were a couple sharks that were very curious about the Kolor Abyss, and I have seen videos where the sharks grab onto camera gear and swim off with it, so my biggest fear was that one of the sharks would catch me off guard and try to take a “test bite” of the rig. So, I was admittedly a little worried that I would lose the rig without getting any footage. Fortunately, the two times when the shark seemed most curious, I was able to just pull the camera away a little bit, which was enough to make the shark turn away.

By using a head-mounted display like Oculus Rift, people can feel like they are in the shark cage without leaving their sofa. How do you see the 360 degree videos development in the next few years?

I think the prospect of viewing 360 degree videos on head-mounted displays like Oculus Rift is very exciting. Viewing 360 degree videos with these displays will create an immersive experience unlike anything that a traditional display has ever been able to offer. Being able to look in any direction and see everything that was going on during the filming will put the viewer right in the middle of the action. I think this technology could revolutionize how people watch video footage!

Do you have other underwater projects?

I don’t have any other projects set in stone at the moment. I really would like to dive with and photograph great hammerhead sharks in the near future. They are a species that fascinate me, and they are currently listed as endangered, so I’d like to be able to help bring more attention to this species. I also really enjoy diving with sand tiger sharks (aka grey nurse sharks) off the North Carolina coast and will likely dive with them in the not too distant future. Of course, I always look forward to diving with great white sharks at Guadalupe, so I hope to return their next autumn, as well.

Thank you George for everything