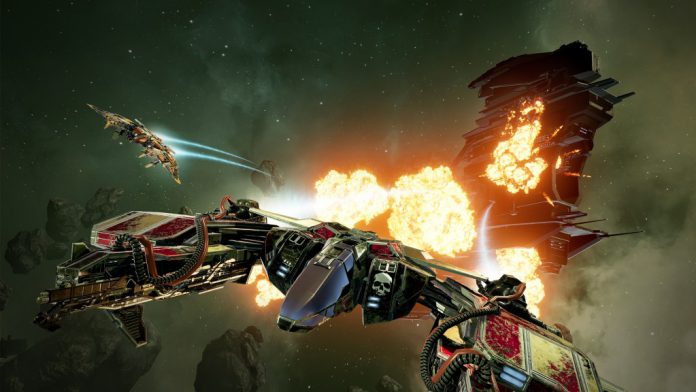 Popular virtual reality (VR) sci-fi shooter EVE: Valkyrie has today received it first major update in the form of Carrier Assault. VRFocus reported last week on the new addition to the videogame, and a series of new screenshots were revealed during the Electronic Entertainment Expo (E3) 2016, by developer CCP Games.

EVE Valkyrie Carrier Assault allows players to now attack these flying fortresses for the first time over three stages. The first stage is skirmish, where the carriers shields must be taken down before progressing. Located across the map are three Power Relay Stations, two of these must be taken to drop the shields for a short amount of time.

When controlled the battle then moves onto the attack phase. Highlighted on a players HUD will be Cooling Nodes which are vital to the ships defence systems. This isn’t an easy process as not only do the Nodes need to be destroyed in order, but players will need to dodge the ships defences and the defending team. There’s also the issue of defending your own carrier should its shields be offline.

The final stage is Breach. Once the cooling nodes have been destroyed the carrier’s central core will be exposed, but its located at the ships heart, and to gain access players must fly through a trench like tunnel for access. Once the core has sustained sufficient damage it’s then a frantic escape to freedom and out of the blast radius to win.

Outside of EVE Valkyrie Carrier Assault CCP Games has added a new multiplayer map called Crossroads, Crossroads PVE game modes, a new multiplayer mode selection, match bonus, tactical menu and ship balancing. Set in a location filled with wreaks, Crossroads includes an extensive asteroid field and a control tower known as Station 27. The map will be available across all multiplayer game modes. The match bonus will be awarded as XP no matter if the match was a victory, draw or defeat. But successful players will receive a win bonus adding further XP to their tally.

With the ship balancing, CCP Games continues the improvements to the gameplay mechanics and lists the following additions:

Fighter: Assuage Reduced the EMS shots required to disable an opponent by 20%

Fighter: Sentry Increased the number of mines that can be deployed from 3 to 5

Support Ships Supports have been rebalanced to fit into the roles of engineer or medic. Medics focus on healing and utility, whereas engineers are more combat focused.

Support: All Increased the hit box (hit detection) by 10%

Support: Sentinel Replaced buff beam with vamp beam (transfers 10% of a targets drained shields directly to its own) Decreased beam lock range from 2.2km to 1km

VRFocus will continue its coverage of EVE: Valkyrie, reporting back with any further updates.