The Freedom360 team has approached Elmo USA to design a camera holder for four of the new Elmo QBiC MS-1 cameras.

After receiving four Elmo QBiC MS-1 cameras we set out to design a holder that allows the four movies from the four cameras to be stitched into a fully spherical (360°x180°) film, without a nadir patch. This was possible due to the unique extreme fisheye lens of the MS‑1 which also is reflected in the special geometry of the Freedom360 holder. This mount follows the same tradition as previous designs by our company. In this configuration the 360º camera can be oriented in any direction, and yet still film everything at once.

Interestingly enough, Tomonori Taniguchi approached Elmo Japan at the same time. Without any communication between him and the Freedom360 team in regards to this project he designed a holder with similar geometry but slightly different functionality, yet maintaining the same base principle. You can see both models at the Elmo booth at Infocom2014 in Las Vegas. 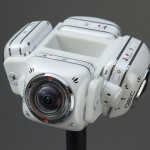 Each camera films a quadrant of the visible sphere around the rig, separately onto each of the four MicroSD cards. The cameras are simply manually triggered one by one, and stop recording in the same way for each scene. Later, the mp4 files are sorted into folders on the computer, and stitched seamlessly into a so-called equirectangular (360×180 deg) standard movie (4k x 2k). 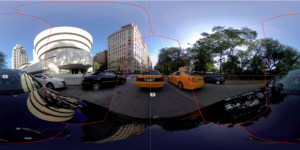 This high-resolution “world-view” can be watched as-is, or be viewed with a panoramic video player, either on your computer screen, your mobile android or i-devices, or on personal head-mounted displays like the Durovis Dive or the Oculus Rift. 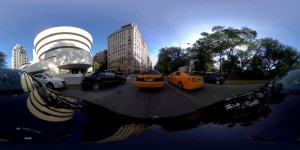