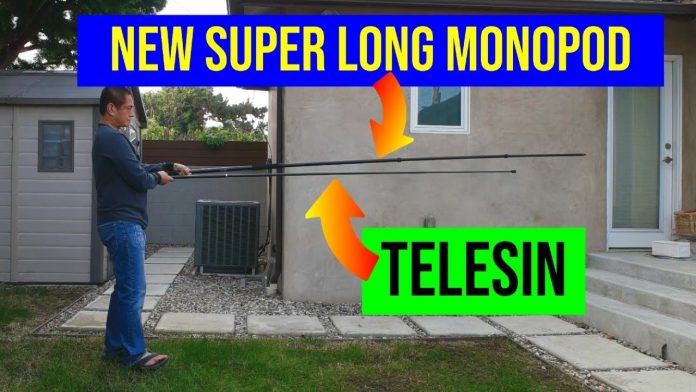 
How would you like a super long monopod (longer and stiffer than the Telesin)?  How about a quick release for your 360 camera (yes, it’s invisible) or a 360 camera light that isn’t upside down? Here are eleven 360 camera accessories that you probably haven’t seen before — and they work for almost any 360 camera, including Insta360 One X2, One R, One X, GoPro MAX, Ricoh Theta V, Theta Z1, and Qoocam 8K.

Here is a list of the accessories and where to buy them:

00:29 #1 Koolertron: longer than Telesin selfie stick (around $70).  Everyone loves the Telesin, but this one is going to make it obsolete.  Koolertron is a long monopod like the Telesin, but it has several advantages: it is significantly longer (350cm vs 270cm), stiffer, can be adjusted to any length, and is also hollow, so it can be used to route a microphone or power cable and make the cable invisible to the camera.

02:07 #2 Manbily MT-02 (around $30).  Full review here. This is one of my favorite stands because it has a unique spring-loaded connector that can work with a 1/4-20 hole or 3/8-16 hole with no adapter needed.  The legs are individually extendable and can be positioned at two different heights, which makes it work well for inclined surfaces.  It also has a wide base for better stability.
02:53 #3 Falcam quick release (around $30) for monopods.  This is a quick release that works very well for attaching your monopod to your stand.  It can be locked and unlocked easily.  As a bonus, the quick release attachment and the clamp are both Arca-Swiss compatible.  It can physically be used with a 360 camera as well but for most 360 cameras, the camera attachment will appear in the 360 photo or video.  Instead, see #4 below.

04:22 #5 Moza Slypod E slider monopod ($299).  This is a unique motorized slider and monopod.  When used with a 360 camera, it can create complex camera movements similar to those of the Edelkrone Jibone, but at a fraction of the cost (and of course, the image quality of a 360 camera won’t be anywhere close to that of a DSLR).  The Slypod is also compatible with DSLRs.  The one issue with the design is that the weight is not evenly distributed.  You’ll need a very sturdy tripod (the Slypod’s mount has 1/4 and 3/8 holes and is Arca-Swiss compatible).  If you want to use it with a DSLR, you may need a support arm.

10:53 #8 Ulanzi PT-13 super bracket (around $25).  This is a unique bracket that has a triple cold shoe that can be rotated and swiveled.  I used this to mount a 360 camera upside down, beside a monopod, allowing me to mount as many as four accessories above the camera.  Unfortunately,

Here’s a 360 photo comparison with and without the bracket:

15:29 #11 Insta360 One R ND filters.  If you want a cinematic look for your Insta360 One R videos, try an ND filter.  With an ND filter, you can use a slower shutter speed which can make your video look a bit less digital.  For photos, an ND filter can be used for very long exposures in bright conditions.  I recommend the ND1000 filter for photos, which is enough to slow the shutter to around 1 second in cloudy conditions.

The post Eleven ASTONISHING 360 camera accessories for any 360 camera in 2021 appeared first on 360 Rumors.