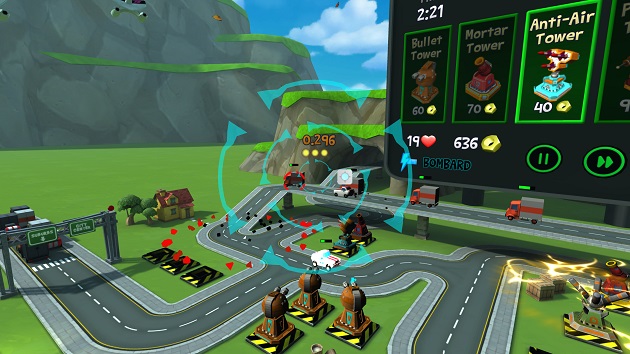 Indie developer Element Games recently revealed that its virtual reality (VR) title Evil Robot Traffic Jam would be releasing on the Gear VR mobile head-mounted display (HMD) on 10th December. Now before the titles launch next week Element Games has sent VRFocus a couple of exclusive screenshots from maps that haven’t been shown anywhere else.

The two screenshots below don’t indicate what the maps maybe called but do show some of the action taking place with the various enemies and weapons available in this tower defence title. What appears to be mid range enemies in the first screenshot are made up of cars and small lorries, while in the second much bigger armoured personnel carriers (APCs) are shown being attacked by rail guns. The images also reveal some of the other types of weaponry available to players, including a bullet tower, mortars, anti-air and an electrical area effect tower.

Evil Robot Traffic Jam will feature a player progression system whereby medals can be attained, giving the player attributes such as extra starting cash, helping towards harder levels. These attributes can also be used on previously cleared maps. Each map features an endless version, allowing players to try to beat their high scores.

VRFocus will continue to report on the latest updates from Element Games to Evil Robot Traffic Jam as the title nears launch. 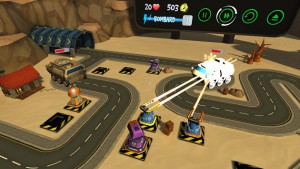