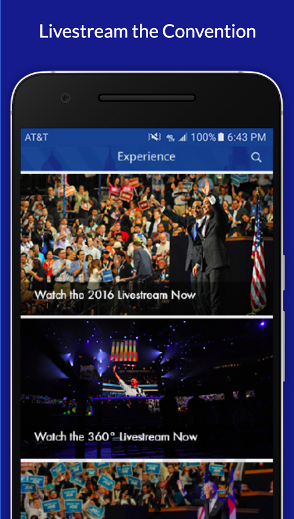 Whether your interested in politics or not the current US presidential race between Democrat Hillary Clinton and Republican Donald Trump has got the nation, and the world watching and waiting. Award winning visual effects house Digital Domain is bringing VR technology to the 2016 Democratic National Convention this week with a curated live-stream.

Providing four 360-degree camera views of the event which has been running this week from the Wells Fargo Center in Philadelphia, Digital Domain will also be providing 360-degree highlight videos for on-demand viewing throughout the convention.

All the footage will be broadcast to the DNC mobile apps on the iOS App Store and Google Play as well as the official DNC website and YouTube channel.

“Politics has always been shaped by grassroots activism, and using this new immersive technology gives everyday voters a chance to feel more connected to the candidates and their speeches than ever before,” said Daniel Seah, Chief Executive Officer, Digital Domain Holdings Limited. “We are proud to partner with a renowned organization like the DNC to share the 2016 convention with virtual reality audiences worldwide.”

“For a nation of voters, and particularly Millennials, virtual reality and immersive video are becoming commonplace in this modern era,” said Andrew Binns, Chief Innovation Officer, Democratic National Convention Committee. “Digital Domain has provided this crucial aspect to our suite of coverage, providing a high-tech element that builds excitement and helps drive viewership and potentially even voter turnout.”

Digital Domain has been continuously driving its VR content though partnerships such as this. As part of its global strategy, Digital Domain recently purchased Immersive Media Ventures, the company it partnered with in 2015 to create joint venture IM360.

For all the latest VR news from Digital Domain, keep reading VRFocus.