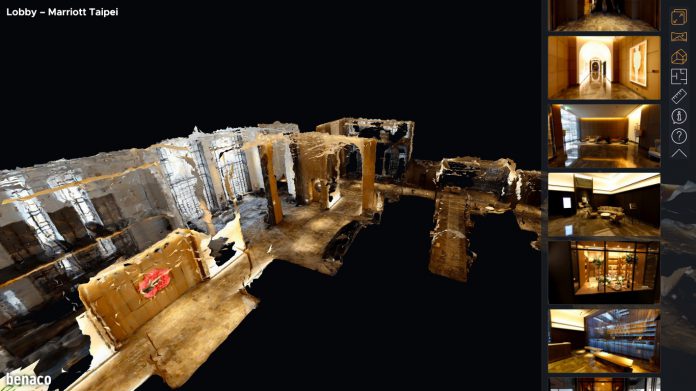 Almost all virtual tours consist of linked 360 photos, and they work pretty well.  However, most of them require you to link the photos manually, and the amount of time needed to do so increases exponentially with the number of photos taken.  Conventional virtual tours also require you to create a floor plan separately, which can be tedious to create accurately, and some do not even have an option to show a floor plan.

Benaco is a virtual tour system that uses conventional 360 photos and converts them into a 3D model.  The process is completely automated and there’s no need for you to link the photos.  There are many other benefits as well.  A 3D model of your virtual tour enables you to automatically create a floorplan and a dollhouse view.  A 3D model also enables a fly-through type transition between nodes, similar to Matterport.  You can also take measurements and distances using the 3D model.

Here is a sample virtual tour:

How to create a virtual tour with Benaco

To create a virtual tour with Benaco, you need to take a photo every 5 feet or so (tight spaces such as doorways will need more photos).  When you upload them to Benaco’s servers, the servers will convert the photos into a 3D model automatically, which will be embeddable on websites, and can be viewed on a browser or on a VR headset via WebVR.

These features have previously been available on other services such as Cupix.  However, one difference with Benaco is its pricing.  The amount you pay for a tour is based on the number of photos you upload from it, and it is a one-time fee.

The tour is free until you publish, which means you can upload and process for free, and you don’t have to pay for a tour until after it is processed and you review it and decide you want to use it.

A critical distinction in Benaco’s pricing is that after payment, the tour remains available permanently, unlike Matterport or Cupix, where you have to pay a monthly fee or else the virtual tour will no longer be visible.  This gives virtual shooters far more flexibility and certainty, and has a lower long term cost.

Try it for free

Benaco has made a special offer for 360 Rumors readers: for a limited time, you can use the code 360RUMORS to unlock your virtual tour for free.  You can create an account for free here.  If you have any questions, leave them in the comments below and I’ll invite the developers to respond.

The post Convert your 360 photos into a 3D virtual tour AFFORDABLY with floorplan and dollhouse view with Benaco appeared first on 360 Rumors.