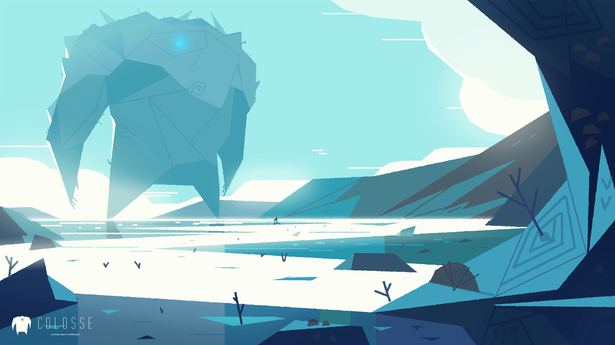 Born from an Oculus VR Mobile VR Jam earlier this year, a team of developers created COLOSSE as an innovative storytelling experience that has now launched on Samsung’s Gear VR head-mounted display (HMD).

COLOSSE is a stylized, character-focused virtual reality (VR) experience that explores viewer directed storytelling on the Gear VR. The story is centres around long lost great spirits known as COLOSSE, as it explores themes of fear, power and respect. These spirits appear as intricately-designed giants. The experience features no character dialogue although narration will come from an elder telling this story.

The team behind COLOSSE is made up of Nick Pittom, the creator of two popular VR adaptions of scenes from Studio Ghibli movies, former Oculus VR employee and VRSE producer Joseph Chen. The title features art from Jasmin Lai, Kevin Dart and Eran Hilleli. Animation was handled by Nelson Boles, Alex Grigg and Jasper Trenfield, while David Kamp created the Music/Audio, Daniel Sproll on UX/Development and Jason Storey as coder.

The VR experience is available to download now for free for Samsung’s mobile HMD. Those who don’t already own a Gear VR Innovators Edition won’t have long to wait for the consumer version as it’ll be released in the US this Friday 20th, while European VR enthusiasts should expect the headset around 1st December 2015 after a reveal on Samsung’s German store earlier.

VRFocus will continue to bring you all the latest releases on Gear VR as the official launch draws near.