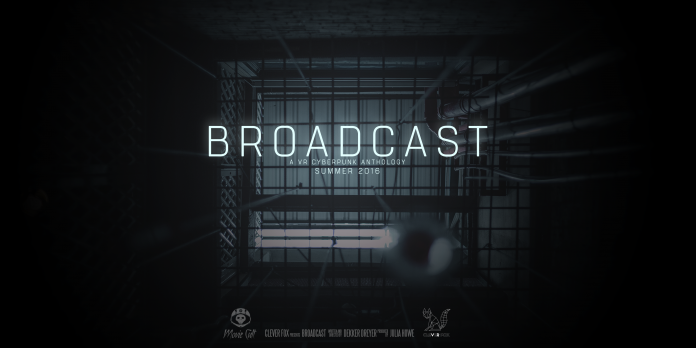 Last month VRFocus reported on the reveal of Coyote, a new virtual reality (VR) horror piece from Last Man Standing creator Clever Fox that was on display at the 2016 Sundance Film Festival. The film was well received by those that tried it, but it seems as if it was just a hint of what’s to come. Today, Clever Fox is announcing a brand new, live action VR anthology series that’s set to debut later this year. That series is called Broadcast.

Described as a cyberpunk piece, Broadcast is set to look at mankind’s relationship with economics, sex, celebrity, and other dark subjects literally through the lenses of VR. According to Clever Fox, the series will ‘draw parallels’ with popular shows such as The Twilight Zone and The Black Mirror. A trailer is expected to arrive next month, with a preview episode to be delivered to members of the Movie Cult Facebook community in April 2016. The full series will debut in summer 2016.

“A series in VR that explores what the world could be like in a VR-heavy future is admittedly very meta,” said Dekker Dreyer, Clever Fox Chief Creative Officer and Broadcast showrunner. “My ideas for the series are rooted in existing anxieties about the pressure social media puts on us to appear successful, the idea of celebrity for the sake of celebrity, the relationship between ‘personal brand’ and identity and commerce… these are all things that virtual reality will challenge us with in a very real way and we’re writing a series that tries to get five minutes out ahead of that. I’m a huge fan of things like Bladerunner and Ghost in the Shell and although our series won’t be action adventure heavy I’m hoping that we share some underlying DNA with those universes.”

For the latest on Broadcast and all other VR media, stay tuned to VRFocus.