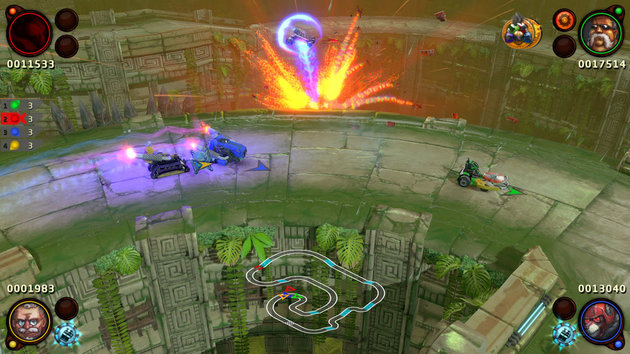 It was this time last year that Targem Games implemented virtual reality (VR) support for its top-down racing videogame, BlazeRush. The studio integrated the second development kit (DK2) version of the Oculus Rift head-mounted display (HMD) into the experience, allowing players to see the action unfold in 3D similar to the support seen in another miniaturised racing experience, Toybox Turbos. This week, BlazeRush has arrived on a brand new platform, the PlayStation 4, which of course has its own VR capabilities.

Targem Studios is yet to confirm if this new version of the videogame could support the PlayStation VR head-mounted display (HMD), but it’s always a possibility now that it’s running on the console. In fact, the studio is also yet to elaborate on if it will be updating the VR support on PC to accommodate the upcoming consumer-ready edition of the Oculus Rift, which will be launching in the first quarter of 2016, nor the HTC Vive, which arrives the follow April. PlayStation VR, on the other hand, is due to release sometime within the first half of next year.

BlazeRush is described as a ‘dynamic arcade racing survival game’ in which players face off across circuits, using weapons to take each other down. The title features three different planets to race on, with 16 cars to drive and medals to unlock, with multiplayer features taking centre stage. Targem Games itself is also working on its customisable car combat title, Crossout, for PC. Publisher Gaijin Entertainment – best known for the VR compatible War Thunder – has teased that the title could get VR support in the future, though it’s yet to be confirmed.

For the latest on BlazeRush and all other VR videogames, keep following VRFocus.

The post BlazeRush Hits PS4, PlayStation VR Support Yet to Be Confirmed appeared first on VRFocus.