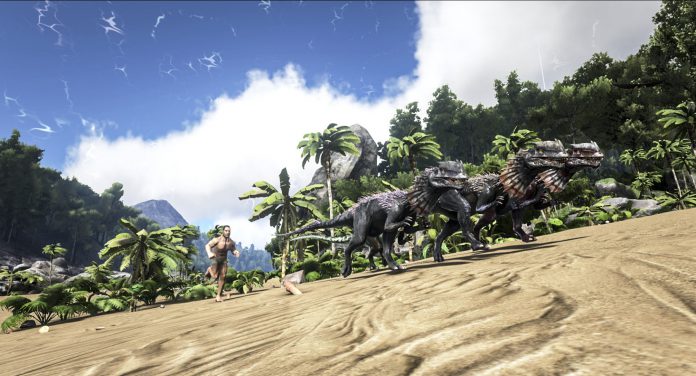 The development team at Studio Wildcard continues to update the Early Access version of its virtual reality (VR) supported survival role-playing game (RPG), ARK: Survival Evolved. A steady stream of updates and fixes have been arriving since the title launched on 2nd June 2015, preparing it for a full release later on down the line. This week sees the team bring another significant new addition to its first-person experience in the form of dinosaur breeding and raising baby dinosaurs.

Players are now able to pair up 2 members of the same species of dinosaur, even if they belong to separate Tribes. Doing would will result in offspring that carry a new set of traits from both parents that have been randomly selected as well as arbitrary mutation. This will allow players to selectively breed beasts for the best possible results, raising stronger generations of dinosaurs. Studio Wildcard promises, however, that this is no easy task, as players will have to care for the baby dinosaurs even in their eggs.

ARK: Survival Evolved is an online experience in which players can build their own settlements and even tame dinosaurs, using them for transportation and more. The Early Access version of the title already supports the Oculus Rift head-mounted display’s (HMD’s) second development kit (DK2), although Studio Wildcard will also be bringing support for the PlayStation VR HMD on PlayStation 4 when this version of the title launches in June 2016. HTC Vive support on PC is also being considered, and the title is also on its way to the Xbox One console.

VRFocus will continue to follow ARK: Survival Evolved closely, reporting back with the latest updates on its progress.