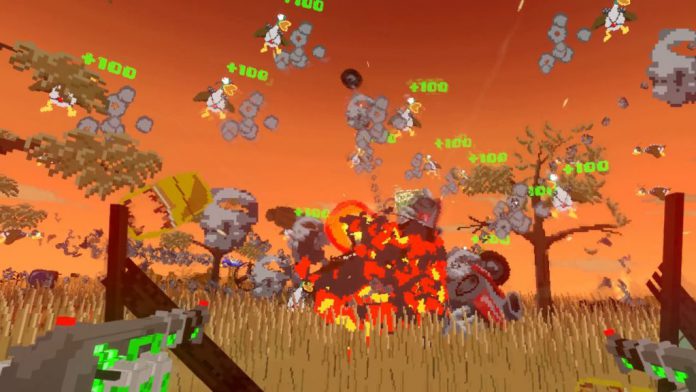 When you first watch the trailer for Duckpocalypse, it is somewhat easy to mistake it for a title like Duck Hunt, however there is a much more sinister layer to this title: the ducks are robotic, are intellectually advanced, and have taken over the world. It is now your duty to kill the offending cyborg ducks, and you can do it on the HTC Vive right now.

In this single-player arcade pixelated looking title, us humans have been at war for way too long, using nuclear warfare, and now the brainy robo ducks have become smarter than us, and have even taken our jobs. Very angry about this, you – one of the few humans who are still around to do something about this – take your guns and try to reclaim your place as top living being on Earth in the only way you know how: violently.

This title is self-described as fast paced, and it is pretty self-explanatory too by the looks of the trailer and screenshots. Simply, mow down all the ducks before you are taken out yourself.

From the trailer you can certainly get the sense of the game poking fun at itself, and the whole concept is a parody of how ridiculous arcade shooters can become, and so Duckpocalypse is running with the ball with its genocide-centric gameplay.

Duckpocalypse is currently on Steam for the HTC Vive, priced at £1.99 (GBP).

For more on the latest HTC Vive releases like Duckpocalypse, as well as all the news, updates, and features in the world of VR, make sure to check back with VRFocus.