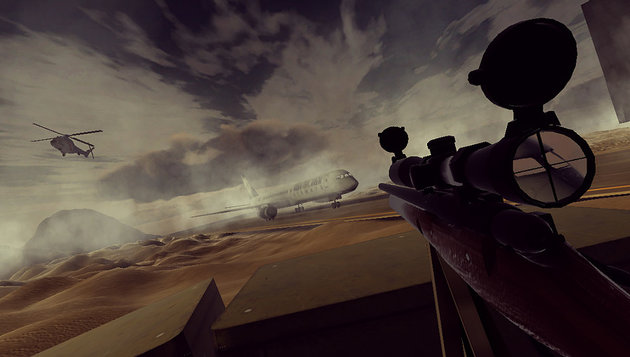 Yesterday, VRFocus reported on a huge virtual reality (VR) track of talks, panels and sessions that was taking place at the Pocket Gamer Connects London event in the UK. A large number of VR developers, including the likes of Bossa Studios, nDreams and Coatsink Software were at the event, talking about the future of the tech. Running alongside the track was the first day of the Very Big Indie Pitch, a competition for developers to talk about their ideas, including VR projects. Selected for the finalists in the first day of the competition was Negotiator VR.

Developed by 4PM games, Negotiator VR is in development for the Oculus Rift head-mounted display (HMD). As the name suggests, players are cast as a negotiator that works for both the military and the police in a story that will span an entire career. Set between the 80s and 90s, players will be able to experience a change in technology and geo-political situations as they encounter a range of different situations. The title aims to give players the feeling of really being a negotiator, piling on the pressure and responsibility.

As one of the finalists for the Very Big Indie Pitch’s VR category, Negotiator VR will today have a day of testing from Pocket Gamer Connects delegates before the winners are announced at the end of the day. Winners will be awarded a share of a promotional prize package worth $7,000 USD, while first place will also get Amazon’s Fire TV and a game controller. Mobilize will also offer a Pilot Soft Launch Package worth $3,000.

For the latest updates on any and all VR titles, keep reading VRFocus.