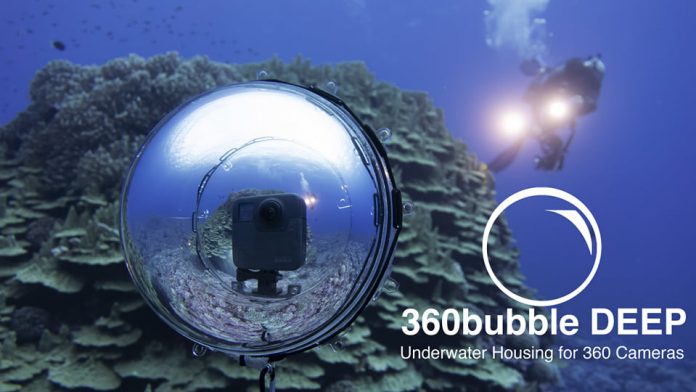 
360bubble, creators of its eponymous dive case, is launching a new dive case for 360 cameras called the 360bubble Deep. The new case is offers a full, unobstructed 360 view with no visible nadir, and a depth rating of 150 meters. Here’s the promo video, and sample photo and videos.

Shooting underwater presents amazing opportunities for 360 photos and videos.  However, there are many significant challenges.  Most 360 cameras are not waterproof.  The few that are do not have lenses designed for shooting underwater.  As a result, most 360 cameras will be susceptible to refraction, which increases the focal length and thus creates a wide blind spot along the stitch line.  The photos and videos also tend to lose sharpness because the hyperfocal distance changes.

360bubble Deep is a new dive case for 360 cameras.  Unlike other dive cases, the 360bubble Deep provides a completely unobstructed 360 view.  Here’s a promo video:

The interior of the case appears to have a standard tripod mount.  360bubble stated that the case will be compatible with popular 360 cameras including the Insta360 One X, GoPro Fusion, Ricoh Theta Z1.  It also seems to fit the Qoocam 8K and GoPro MAX.

Here is a fully spherical 360 video, shot on GoPro Fusion.

Here is a sample reframed video, also from the Fusion:

The video appears to show slight warping along the stitch line but otherwise it does seem to provide a full 360 view.

One issue with using the case is that it appears to make the camera’s buttons inaccessible, which seems to imply that you’ll need a waterproof wireless controller such as the GoPro Fusion Smart Remote (note: Insta360’s Bluetooth controller is not waterproof).  For other cameras, it seems that you’ll have to begin recording before you enter the water (using your phone to trigger the camera), which seems to mean that you will be limited to one video, for the maximum available recording time of your camera.

Another possible issue is how the case can be opened and closed. Will it require special tools? I’m curious to see how they solved this.   In any case, the possibility of a completely unobstructed 360 view underwater, with no refraction, could be enough of an advantage to outweigh these potential limitations.

The crowdfunding campaign launches on Kickstarter tomorrow November 15, 2019, with a 40% early bird discount.  Thanks to 360 Tips & Tricks for bringing this to my attention (check out their YouTube channel)!