Swedish singer-songwriter Jose Gonzalez and the collective “Assembled In Sweden” have released a nice 360 degree video called “Eyes in Space“. According to them, seven billion people on Planet Earth, of which only 536 are lucky enough to have seen Space. The project Eyes In Space aspire to change this, taking every one on a personal journey to roam the cosmos.

Can you introduce the collective “Assembled in Sweden”?

“Assembled in Sweden” is a collective based in Sweden. We create tailor-made products and experiences by connecting physical and digital. R&D is at the core of what we do: Failing, Testing, Learning, Dreaming and Doing. Creating immersive 360 video content is just one aspect of what we do.

Through this project, what kind of message do you want to transmit?

The Eyes in Space project is about exploration, curiousity and perspective. There are seven billion people on Planet Earth, of which only 536 are lucky enough to have seen Space. The collective’s maiden voyage allows everyone to wander space freely using immersive 360-film to create an endless, all-sensory experience. Eyes In Space is a global collective established to mesh artistic experiment with scientific innovation to open new worlds. Space is the collective’s first destination. 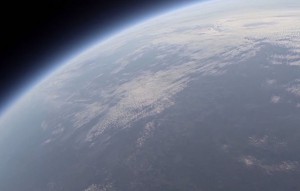 From a certain vantage point, there is a feeling which astronauts describe as the “overview effect”. Basically its the realization that we are a fragile blue ball filled with life floating in the void and darkness space. We wanted to give everyone the opportunity to roam space freely using an immersive 360 experience.

What hardware and software did you use to create this video?

We used Autopano Giga, Panotour Pro and Autopano Video Pro, custom housing and rig for 6 GoPros Hero3+. Once the rig went to space, we recovered them using a GPS Location Marker.

Would you recommend to use an Oculus VR by watching the video?

Yes, it is an amazing experience. I particularly recommend it for people who are afraid of heights

We have done many other projects. You can learn more by visiting: Assembledinsweden.com.

Many thanks for sharing and once again, congratulations!