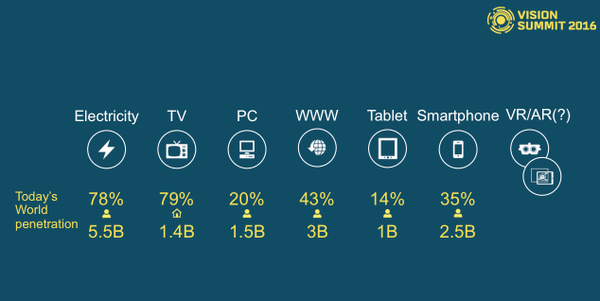 Today sees the start of the annual Vision Summit 2016, two days of conferences aimed at industry professionals in the virtual reality (VR) and augmented reality (AR) industries. To kick-off the event a series of keynote addresses is being given by some of the best known names in the business. John Riccitiello, CEO, Unity Technologies has been predicting how the market will grow.

In a tweet by Unity it reads: “@johnriccitiello predicts #VR market will grow slower than expected, but will change everything! #VisionSummit16″. But the biggest problem as show in the image below maybe cost, with VR headsets and accompanying PC’s likely to put main stream consumers off.

With the Oculus Rift priced at $599 USD excluding a PC, and its newly announced Rift/PC bundles starting at $1499 USD, only the most enthusiastic VR fans are likely to jump on board. With the HTC Vive and PlayStation VR head-mounted displays (HMDs) yet to reveal a price this may change, but that won’t be clear until later on this year.

VRFocus will continue to follow news from the Vision Summit, reporting back any further announcements.

The post 2016 is not the year to solve the biggest problem for AR/VR: cost appeared first on VRFocus.