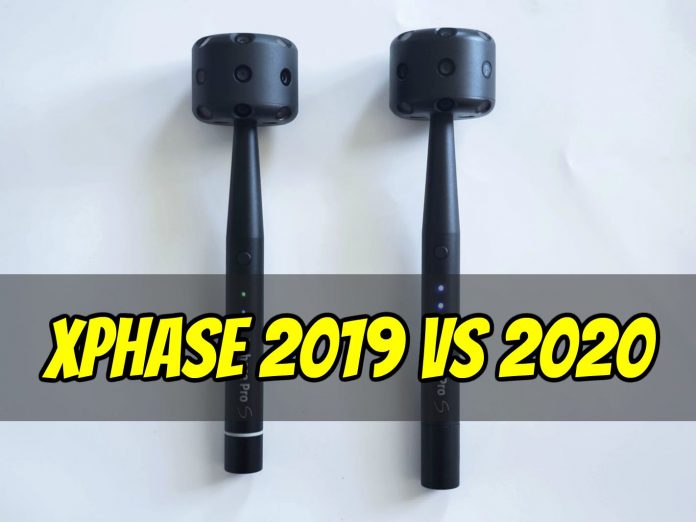 
I ordered the 2020 version of the XPhase and got it yesterday.  I ran some tests on it and I’ve found significant improvements in image quality and usability!  Here are my test results and some full resolution 360 photo samples.

XPhase Pro S (reviewed here) is a 360 camera with a resolution of 135 megapixels — the highest resolution 360 camera on the market.  It has detail that rivals, or even exceeds that of DSLRs shooting with fisheye lenses.  However, I have not recommended it for beginners because of some issues such as color casts and stitching errors, which take skill and time to remove.  However, the 2020 version solves (or improves on) most of the issues that I had with the 2019 version.

At first glance, the 2020 version looks identical to the 2019.  In fact, both are labeled “XPhase Pro S.”  However the 2020 has a longer base cap and does not have a white band around the base.  It also has slightly larger LED lights than the 2019 version.

I tested the XPhase 2020 briefly and here are the 10 advantages I’ve found, and one disadvantage (tradeoff).  First, here are 360 photos from the 2020 version and 2019 version.  The samples are from XPhase stitched as 16-bit PNG with the XPhase desktop app Panomanager and edited in Lightroom with minimal edits only, to give you an idea of what you can expect from XPhase photos, straight out of the camera.  For comparison, I also added samples processed with only Step 1 of the HQ Method, with no edits. 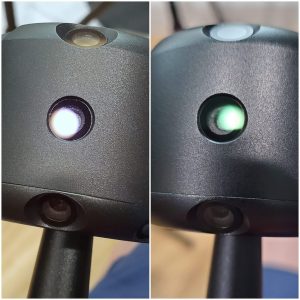 The crops below also show a glaring difference (ha…) between the 2019 and 2020 version:

With the 2019 version, there were some color casts, usually in shadows.  The 2020 version has less color casts.  The color casts can be reduced even further using the HQ Method (the one below is only with Step 1 of the HQ Method, with no edits).

Some 2019 cameras like my unit have persistent stitching errors in a certain area of the photo, and I would see small breaks in lines for example.  The 2020 version that I got has no persistent stitching errors that I’ve found so far.  Having said that, stitching is still not perfect.  XPhase uses optical flow stitching, which means that it will bend some lines to force them to align with another lens.  As a result, some straight lines have some waviness or appear a little bent.  Fortunately, these bent lines can be easily fixed during editing.

5. USB power port on the side

The 2019 version was charged with a proprietary cable.  The 2020 version has a new Micro USB port on the side for easier charging.  And because it’s Micro USB, you will be able to find it almost anywhere, even if you left it at home.  Please note the Micro USB is only for power.  It cannot be used for data transfer.

One issue with the 2019 version is that the battery was not removable.  Its 3400mah battery was rated for 250 photos.  There is now an optional external battery pack that can connect to the base of the XPhase.  The battery is 6800 mah and, combined with the XPhase’s own battery, has triple the total normal capacity.  The battery has a Micro USB port for charging and has a metal 1/4-20 tripod hole.

As a bonus, it also functions as a short selfie stick — one that may be used at theme parks and other places that normally prohibit selfie sticks.   I’ve been able to take a 360 photo with it, without a selfie stick.

The 2020 XPhase has a new Wi-Fi antenna.  I haven’t determined the maximum range.  However, the 2019 signal strength loses one bar (on my phone Wi-Fi) after around 37 feet.  The 2020 loses one bar after around 77 feet.  Therefore the 2020 version appears to have more than twice the distance of the 2019 version.

The 1st generation and 2019 versions had a very compact base that could accommodate only one or two brands of thumb drives.  The 2020 version can now accommodate even taller thumb drives, making it easier to buy extra thumb drives.

9. Better resistance to fogging (I have not tested this)

Some users experienced fogging when the camera got very hot such as after shooting in interval mode for a long time.  Apparently, there is moisture in some of the materials, which was released when a certain temperature is reached.  The 2020 version now uses a more thorough drying process to ensure that there is no fogging.  I haven’t tested this because I haven’t experienced fogging, even in my older units.

11. Metal base thread but plastic base cap (not an advantage but a tradeoff)

In the 2019 version, the base cap, which has the tripod hole, was made of metal but was secured by a plastic male threaded base.  If the plastic was worn, this would make the camera less secure.  In the 2020 version, the male threaded base is now metal.  However, the base cap is now made of plastic.  This is because of the Wi-Fi antenna (see above).  In the 2019 version, the Wi-Fi antenna was physically connected to the metal base cap and used the cap as an antenna.  The new Wi-Fi design does not connect to the cap and therefore using a metal base cap would block the Wi-Fi signal.  Overall, I prefer the 2020 version because if the base cap is damaged, it can be easily replaced.  Whereas, with the 2019 version, if the threaded base was damaged, it would not be easy to replace because it is integrated with the body.

You can download these XPhase 2020 sample photos for your private use only, and only for evaluating XPhase.  Please do not upload them anywhere or share them with anyone, regardless of whether or not you edit them.

The XPhase Pro S 2020 version is a significant improvement over the 2019 version.  The 2019 version had exceptional detail but issues such as glare, color casts, and stitching errors in some units made me hesitate to recommend it for beginners (although it is great for outdoor photos).  The 2020 version on the other hand, delivers DSLR-level detail instantly with much less glare, less color casts, less fringing, and many other improvements.  The most significant remaining issue is that some straight lines will bend.  For outdoor or landscape photos, this is not a problem and XPhase would be the ideal 360 camera.  For virtual tours, take a look at the 360 photo samples I provided for the 2020 version and you can decide whether the bending of straight lines is acceptable for your market or if you have the editing skills to fix those efficiently.  If so, then the XPhase offers far more detail than any other 360 camera, with excellent dynamic range.  For a full review of the XPhase including the workflow and a tutorial, please see my main review for the XPhase.  If you’d like to buy the XPhase, you can use my affiliate link to get a free 128GB thumb drive, which will also enable me to do more tests and reviews.