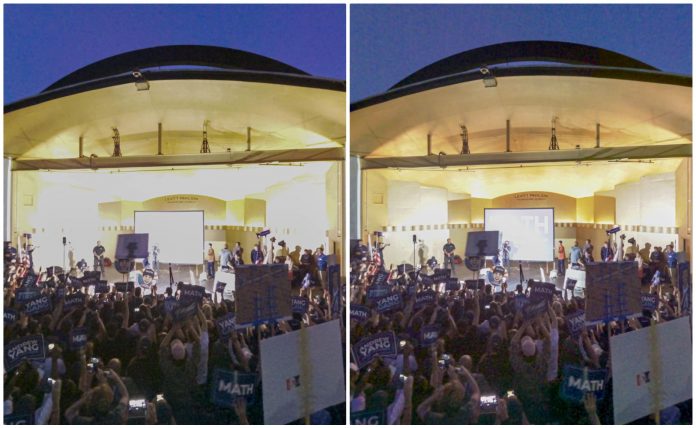 XPhase Pro S is the highest resolution 360 camera on the market and has the unique ability to capture HDR photos without ghosting.  While it had acceptable stitching, the stitching was seldom perfect, with small stitching errors here and there.

Both versions show the XPhase’s ability to take multi-shot HDR photos without ghosting, even in low light.  More importantly, the new app shows far greater highlight detail.  Both photos were stitched on the desktop, straightened with Hugin, and edited in Lightroom Classic, with the same highlight recovery settings.  Nonetheless, the photo that was stitched with the new app has as more than one stop additional highlight range.

In addition, stitching has improved significantly.  The palm tree to the right of the stage had a stitching error in the previous app but is now stitched perfectly.

On the other hand, the new firmware has a purple blotch in the sky that is not visible in the previous firmware, and in some parts of the photo, the noise has become more prominent.

Overall, the stitching in the new firmware appears much improved.  I’ve been reviewing other photos and in the majority of them (I estimate 80 percent), I have not found major stitching errors.  Among the photos with stitching errors, the errors seem to appear in a consistent position even with completely different photos:

This suggests either an issue with the calibration of my unit, or with the stitching algorithm.  However, since a majority of photos have no major stitching errors, this would appear to rule out a calibration error.  In either case, it should be fixable.

In addition to the improvements in dynamic range and stitching, there’s a new mobile app that can disable realtime stitching to enable users to conserve battery life and to be able to shoot faster.  I’m also still waiting for the 6-shot HDR, Raw DNG support, and automatic leveling of the horizon.