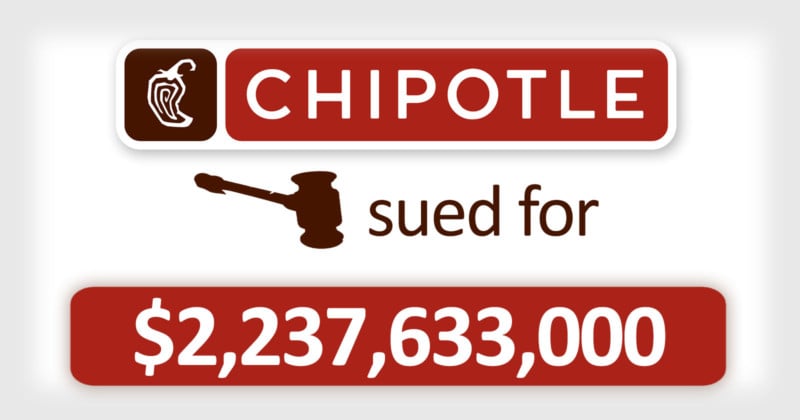 In 2006, Leah Caldwell was eating at a Chipotle when photographer Steve Adams took her photograph. Despite the fact that he couldn’t get her to sign a release, Adams sold the image to Chipotle anyway, and now the company is being sued for a whopping $2.2 billion by a very angry Caldwell.

If $2.2 billion—more specifically, $2,237,633,000 according to ABC Denver 7—seems a little bit steep to you, you’re not the only one. Apparently, this figure represents Caldwell’s estimate of the profits Chipotle made thanks to her image between 2006 and 2015. In fact, once Chipotle announces their 2016 profits, Caldwell intends to increase that already impressive number.

Caldwell is only now suing the company because she didn’t spot the image until 2014, but since then she’s seen it across the US, once in Orlando, FL and twice in Sacramento, CA. To make matters worse, the image was manipulated to include alcoholic beverages “near her meal.”

Chipotle has yet to comment on the case, but we can guess what their reaction is. The idea that over $2 billion in profits can be attributed to a single photograph is … questionable; that said, the company is definitely on the hook for not confirming that Adams image was model released. There’s little doubt Caldwell will not get over $2 billion from the company, but she will very likely get something out of them.