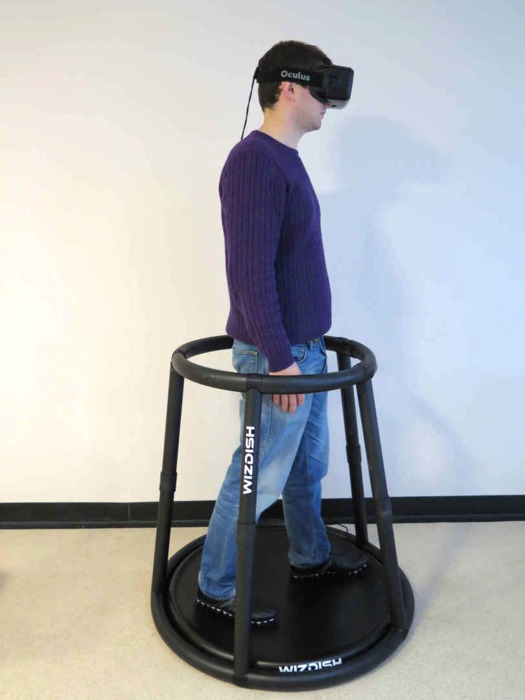 There are a number of companies looking to add more immersive playability to virtual reality (VR) head-mounted displays (HMDs) by way of omni-directional treadmills. VRFocus has covered devices like the Cyberith Virtualizer, Virtuix Omni and ROVR by Wizdish. Wizdish has recently announced that it’ll be showcasing the ROVR at the Wired2015 event being held this week in London, UK on 15th and 16th.

The ROVR weighs around 15KG in total and requires users to put on a special pair of shoes before using. With the shoes on, players will be able to put on a VR HMD such as the Oculus Rift and walk around inside VR experiences as if they were really there. The device can be flat packed, allowing for easier transportation that its rivals. The omni-directional treadmill works with any PC / laptop and HMD that uses software controlled by WASD keys, mouse or joystick inputs.

ROVR can be used for various VR experiences with Julian Williams, CEO, WizDish Ltd saying: “Many other experiential marketing and architectural companies such as Arup are starting to use ROVR so the VR market really is starting to pick up. They are choosing ROVR because its reliable, anyone can use it straight away without fuss, and we deliver when we say we will.”

The treadmill has already been used at events, for VR experiences. American bank Wells Fargo has utilised the ROVR for its Together Experience tour, with an Oculus Rift HMD.

The ROVR can be purchased from Wizdish for £399 GBP, with delivery taking approximately four weeks. VRFocus will continue to report on the latest updates from Wizdish as they’re announced.