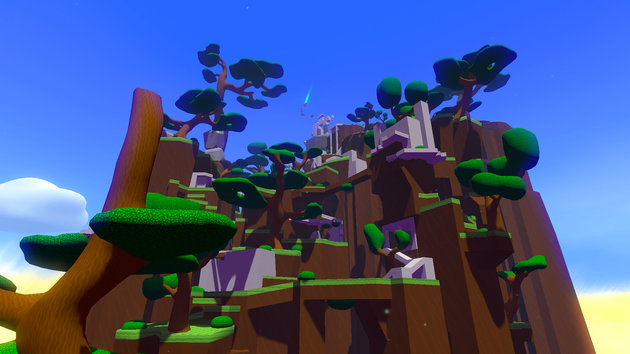 After a hugely busy week for virtual reality (VR) as a whole with the Oculus Rift head-mounted display (HMD) launching its pre-order campaign the HTC Vive announcing a second development kit in the Vive Pre, it’s refreshing to get some news on actual VR software. Today sees the launch of the pre-release version of Psytec Games’ first-person adventure, Windlands, over on Steam Early Access. It arrives with full support for the Oculus Rift’s second development kit (DK2), though the full consumer edition and the HTC Vive will also be compatible when they launch.

Windlands is a platform-based experience in which players will travel through the remains of an ancient civilisation using an enhanced jumping mechanic and, more importantly, a pair of grappling hooks. Players can master the use of these hooks to swing through areas, taking in the title’s picturesque visuals. On HTC Vive and, eventually, Oculus Touch, players will be able to realistically control these grappling hooks with their hands, though Windlands still features full controller support in which players aim the hooks using head-tracking technology.

The title can currently be picked up at a discounted price of £11.99 GBP before 15th January 2016, where it will return to its usual price of £14.99. The full version of the title is intended to launch in around six months’ time though, for now, the pre-release version contains a tutorial level, main hub world and the first environment to explore. More worlds and challenge levels will be added in the coming weeks and months.

Check back with VRFocus for the latest on Windlands.