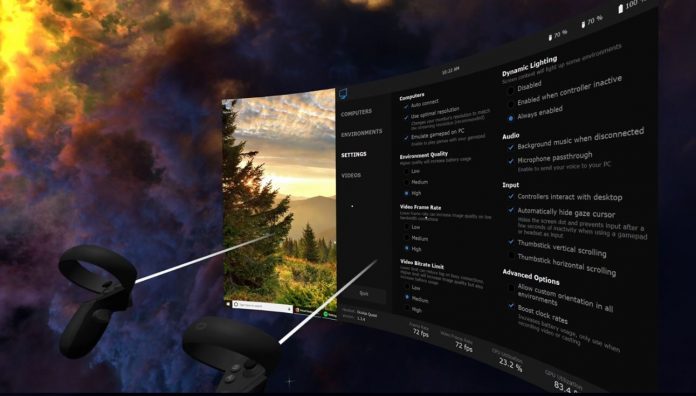 Here’s what Guy Godin said about the incident on Reddit:

“Hi guys, I’m sorry to announce this but Oculus doesn’t want the SteamVR streaming feature in their store. I’ve been developing in VR for 5+ years and as some of you may know, I like to experiment and push the envelop with the tech. I saw the ability to stream VR content from your PC as a very cool idea. I thought it would be a perfect fit for my app since it already gives you access to your computer. Like a nice bonus feature. I worked on this for months and was eager to improve the functionality as I received your feedback over the last few days but according to Oculus, I am hurting Quest..”

Why did Oculus force Virtual Desktop to remove SteamVR streaming?

I speculate that Oculus’ move is because of their long term strategy: they want Oculus Quest users to stick to the Oculus ecosystem.  For example, a game like Fruit Ninja is available for all systems, so it’s possible to buy it on either the Oculus store or Steam store, and you’ll be able to play it on either an Oculus or SteamVR headset.  However, Fruit Ninja is one of several games to support cross-buy on Oculus, so if you buy Fruit Ninja on Oculus Store for the Rift, you’ll also be able to download it for Quest.   This gives an incentive to purchase Fruit Ninja from the Oculus store instead.

This explanation is not an effort to justify Oculus’ move.  I’m just explaining their likely motivation for it.   Like everyone, I disapprove of what Oculus did even though I’m a fan of Oculus.  Facebook and Oculus have probably been the most important benefactors of the VR industry, thanks to their subsidies of software which made it possible for developers to create games such as Superhot VR.  But that shouldn’t give them license to throw their weight around.

The truth is that the streaming apps I’ve tried (ALVR and Vridge) were just barely playable and nowhere as fun as using native apps for the Quest much less the Rift.  I doubt that many people would truly use Virtual Desktop to play SteamVR games on the Quest.  And even if they did, the same benefit accrues to Oculus Rift apps (i.e., you can play Rift games on Quest using the same technique).  Moreover, a native cross-buy app for Quest can be used anywhere, not just within wireless range of a VR desktop, so there’s still an advantage in buying from the Oculus store (assuming the app allows cross-buy).

IMHO, the damage to goodwill caused by this move is a much more tangible harm than any potential lost sales from Virtual Desktop being used to play Steam VR games.  Hopefully, Oculus will change its mind and allow Mr. Godin to restore SteamVR streaming to Virtual Desktop.