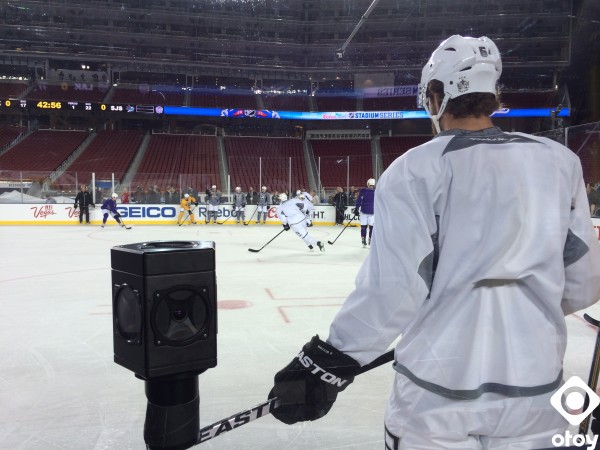 The NHL has been playing with virtual reality (VR) capabilities for experiences such as a goalie simulator and one of the biggest VR content creators, Jaunt, taking on the sport to create immersive pieces. Now the hockey league is trying out getting viewers to watch games from the seats during games using the Samsung Gear VR head-mounted display (HMD).

Using tech from NextVR and the Gear VR, hockey game footage was live-streamed by the Los Angeles-based Cloud graphics company, OTOY. The perspective isn’t kept to just the seats as fans can watch the game from directly above the goalie and the goalie line, letting viewers get a more rounded experience than what they would get being at the game.

Jules Urbach, CEO of OTOY, said in a statement: “Whether you’re a fan living on the other side of the country, or you just couldn’t snag a seat to the big game in your own backyard, virtual reality lets you be as close to the action as any ticket holder.

“The NHL has always been incredibly progressive about how it uses technology to give fans access, and we’re excited by the possibilities of harnessing OTOY’s virtual reality technology to help the league get fans even closer to the game they love.”

This new feature to NHL games was tested during the NHL Stadium Series game between the LA Kings and San Jose Sharks at Levi’s Stadium, and the hockey league will be working with OTOY to live-stream more games in time.