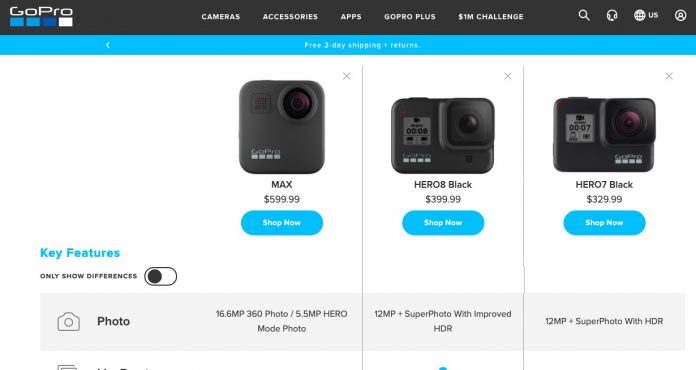 
Was GoPro MAX (previewed here) originally priced at $599, instead of $499?  Why did GoPro drop the price, and what does it mean for the 360 industry?

GoPro MAX is the new stabilized 360 camera from GoPro.  It was launched on October 1, together with the new GoPro Hero8 Black.  It is one of the first 360 cameras to feature a touchscreen (the first mainstream 360 camera to offer that feature), and is the first consumer 360 camera to offer realtime stitching with stabilization and automatic overcapture / non-360 video.

Before the MAX was released, I predicted the price to be $599, with a range of $499 to $699 (by comparison, its predecessor the GoPro Fusion launched at $699).  The actual price turned out to be $499, which was a pleasant surprise.  At that price, it offered a very good value compared to the $399 Insta360 One X, which does not have a large color touchscreen like the MAX.

However, I found that in at least one part of GoPro’s website, the MAX is shown at $599, not $499.  If you go to the comparison page, you’ll see that the MAX is listed at $599 (see the screenshot above), while the Hero8 is correctly shown at $399.  Could this be an indication that MAX was originally to be sold for $599?  If so, why did GoPro drop the price?

GoPro’s Q2 quarterly earnings call provides a clue.  During that call, CEO Nick Woodman said that they were confident that the fall lineup would increase their ASP (average selling price).  An analyst asked if that implied that the Fusion’s successor would be sold at a higher price.  Nick didn’t answer that question directly.  However, given his confidence in the higher ASP, it does seem more likely that the original price was planned to be $599.

Why did GoPro decrease the price?  I don’t know for certain but I speculate that it indicates how they view 360 cameras.  360 cameras are much more common now than they ever were, but they are still not mainstream.  The fact that GoPro decided to decrease the MAX’s price could mean two things: 1) either that they are projecting that it will sell very well and could become close to a mainstream product, or 2) that they are actively enticing customers to switch to 360 cameras, and this is their way of ensuring that they become the leader of the 360 industry.  Either way, it’s a good sign for the 360 industry.  I think this could also mean that GoPro is serious about the MAX and hopefully, they’ll give it the support it needs in terms of fully developed software for mobile (both iOS and Android) and desktop (both Windows and Mac).

What do you think?  Let me know in the comments!