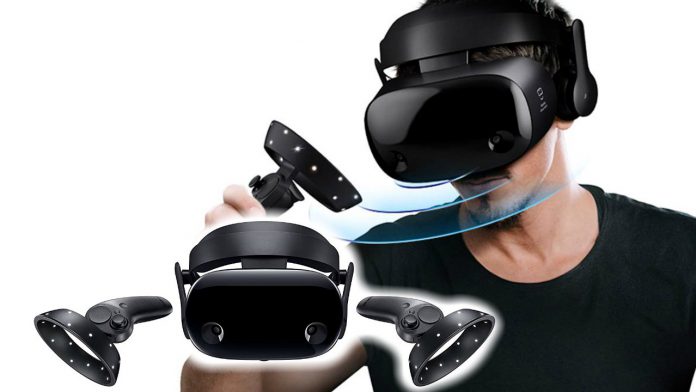 
Are you waiting for the Oculus Rift S?  How would you like a desktop VR headset that has inside-out tracking without external sensors, just like the Rift S, and the same resolution as the HTC Vive Pro, but for $800 less?  The Samsung Odyssey Plus is currently on sale for $299 (regularly $399)!  Find out more about its strengths and weaknesses.

Samsung Odyssey Plus is a VR headset that is currently tied with the $1099 HTC Vive Pro for the second highest display resolution among mainstream desktop VR headsets (1600 x 1440 per eye), approximately 78% higher resolution than the HTC Vive or Oculus Rift, and 25% higher than the Oculus Rift S.  In addition, the Odyssey Plus has a special Anti-SDE filter (similar to the Playstation VR) which removes the screendoor-effect and makes the display appear to have an even higher resolution.

It also has dual AMOLED displays that can display true blacks, unlike regular LCD displays in many headsets.

Samsung Odyssey Plus is compatible with Steam VR as well as Oculus Rift (through the free Revive software) and is also compatible with Windows Mixed Reality.  In addition, its WMR controllers have all the buttons and trackpads needed for both HTC Vive and Oculus Rift games.

Extremely easy to setup and use

Like the upcoming Oculus Rift S, the Samsung Odyssey Plus uses inside-out tracking without sensors.  Simply plug in its HDMI and USB cable — there are no other sensors or cables to attach.

Setting it up is also extremely easy.  Simply make sure your PC is updated to the Windows 10 Fall Creators Update (RS3).  It will then automatically recognize the Samsung Odyssey Plus after you plug in both the HDMI and USB cables.  Your PC will also automatically find the controllers.

Here are a few troubleshooting tips:

1. Do not connect the headset to your PC until you’ve logged in to Windows.  Otherwise, the Windows Mixed Reality home screen will not launch.

4. The headset can have trouble tracking if the environment is too dark, or if there is a small bright spot in an otherwise dim environment.

What PC hardware do you need for it? Do you need a graphics card?

Download Microsoft’s WMR tool to check if your PC is compatible.

I have the Samsung Odyssey (1st generation) on order and I will update this with my hands-on review of the Odyssey, but meanwhile I have the Lenovo Explorer, a Windows Mixed Reality headset similar to the Odyssey Plus.

The PSVR-style halo is much easier to wear and can accommodate a wider variety of head sizes more easily (including my 8 yr old daughter’s head).  Compared to the Oculus Rift, it is heavier and is front-heavy due to the extra electronics for inside-out tracking.  Ultimately, the Oculus Rift is more comfortable and I can wear the Rift for a longer period of time without discomfort, but WMR is not bad for comfort.  I just need to take a break more often.

My WMR headset’s display is more detailed than that of the Oculus Rift, and has less noticeable “god rays.”  The detail is such that the SDE is hardly noticeable.  However, it has a smaller “sweet spot” than the Rift (“sweet spot” is the sharp part of the lens).  The first time you try the headset, it may takes a couple of minutes to adjust the headset to find a headset position that works.

The Odyssey has an even more detailed display than Lenovo Explorer so I’m looking forward to trying it out.  I don’t expect an improvement in the size of the sweet spot.

The tracking works as promised, even on a low-end VR laptop with a GTX 1050 Ti graphics card. However, its tracking is slightly less accurate as the Rift or Vive.  It’s hard to pinpoint exactly why but subjectively, it seems that the virtual objects in the Rift seem to stay more solidly in place.

The controller tracking works as well, although as expected, the system loses track of them if you move them behind you, outside the view of the headset’s cameras.  I also found that the controllers occasionally jump around in VR momentarily.

To my relief, WMR does play Steam VR games for the HTC Vive without any issues or workarounds.  It feels pretty much the same as using the HTC Vive.

Conclusion: should you buy Odyssey Plus?

If you are a hardcore VR player who wants the best tracking, then you’re better off with HTC Vive, HTC Vive Pro, or Oculus Rift.

If you play Oculus Rift games, then you have to make sure your PC has a powerful graphics card (GTX 1070 or better; not sure if 1060 is good enough).  If it is, then the Odyssey Plus has higher resolution than the Rift S, for $100 less.  On the other hand, I expect the Rift S will play Oculus games more smoothly and it will also have better controller tracking because it has more cameras (five instead of the Odyssey’s two).

If you’d like to buy the Odyssey Plus or any other VR headset, I recommend buying it from Amazon because of their lenient return policy:
– Samsung Odyssey Plus
– Oculus Rift S (coming soon)
– Oculus Rift (discontinued; try eBay)
– HTC Vive
– HTC Vive Pro

The post Waiting for Rift S? This $299 VR headset has no external sensors AND has HTC Vive Pro resolution appeared first on 360 Rumors.