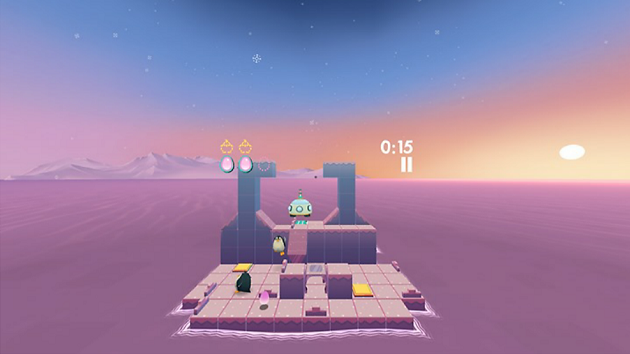 Its been a few months since the launch of Samsung’s consumer-ready Gear VR head-mounted display (HMD). Developers are continuing to keep momentum up by releasing new virtual reality (VR) experiences on a weekly basis and adding updates to titles. This week Archiact Interactive has launched a major new art update to its puzzle title Waddle Home.

Upgrading Waddle Home to version 1.2, new improvements include three new environment changes, new characters and a new song. For the environments there’s a sunset setting to enjoy while playing. For night time you’ll be able to watch a myriad of colours dance through the sky from the Aurora Australis, and during the day new clouds and dazzling colours have been added to liven up the experience.

New characters include Orca families, seagulls and a mysterious new friend may appear in any level. Adding to the ambiance is a new song as well. All the upgrades are available throughout Waddle Home’s 40 levels to give that extra replayability value.

Waddle Home sets players the challenge of saving a group of trapped penguins. Played from a third-person isometric view players must guide penguins down a path to safety while collecting eggs. Obstacles include traps and patrolling guards that the penguins must avoid in order to get off out of the area safely. Players will be scored based on their completion times and the amount of eggs that they collect in each level.

VRFocus will continue to bring you the latest updates and releases for the Gear VR HMD as they’re announced.